Review: Out of Sight, Out of Time - Ally Carter

Out of Sight, Out of Time by Ally Carter, published by Orchard on 5th April 2012

Goodreads synopsis:
The last thing Cammie Morgan remembers is leaving the Gallagher Academy to protect her friends and family. But when Cammie wakes up in an alpine convent and discovers months have passed, her memory is a black hole. The only traces left of Cammie’s summer vacation are the bruises on her body and dirt under her nails. All she wants is to go home. But even the Gallagher Academy now holds more questions than answers as Cammie and her friends face their most difficult challenge yet. With only their training and a few clues to guide them, the girls go in search of answers on the other side of the world. But the Circle is hot on their trail and will stop at nothing to prevent Cammie from remembering what she did last summer. 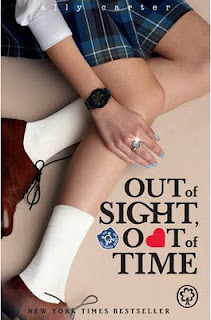 Review:
There may be spoilers from previous books in the series.

There's action and adventure, as well as mystery and intrigue around every corner as the Gallagher Girls return in the fifth instalment of the series.  Take a deep breath now because this book will take you on a rollercoaster ride full of non-stop excitement.

Ally Carter's Gallagher Girls series is one of my favourites.  She can't write them fast enough for me!  Each book only gets better and better and as one layer is peeled back and a secret revealed, there's always another one waiting just underneath.  These books are compulsive reading so before you start 'Out of Sight, Out of Time' make sure that you've cleared your schedule for the rest of the day.

After a huge bombshell at the end of book four, I was dying to catch up with Cammie and co and find out what was going to happen to them next.  There's no going back to normal for Cammie however who finds that she's been awol for the whole summer with no memory of what really happened to her or where she was during that time.  It's up to her and her friends to piece things together even if it means remembering something terrible.

Ally Carter has the art of suspense down to a tee.  The whole way through I was on the edge of my seat wondering where Cammie was going to end up next and what she was going to discover.  Just as she was eager and impatient to regain her memories, I was equally as keen to find out too.  With the threat of the Circle of Cavan hanging over her, she's determined to protect her family and friends no matter the cost, but this is one fight that they're not going to be left out of.

At times I wasn't sure who could be trusted in the story but that only added to the sense of danger which is present the whole way through.  The ending was truly shocking and Ally Carter surprised me yet again with her bold choice of plot twists.

This was a fantastic read and a superb addition to the series.  Roll on book six!
Posted by Samantha (A Dream of Books) at 00:00