Half Blood by Jennifer L. Armentrout, published by Hodder on 14th August 2014

Goodreads synopsis:
The Hematoi descend from the unions of gods and mortals, and the children of two Hematoi - pure-bloods - have godlike powers. Children of Hematoi and mortals - well, not so much. Half-bloods only have two options: become trained Sentinels who hunt and kill daimons or become servants in the homes of the pures.

Seventeen-year-old Alexandria would rather risk her life fighting than waste it scrubbing toilets, but she may end up slumming it anyway. There are several rules that students at the Covenant must follow. Alex has problems with them all, but especially rule #1: Relationships between pures and halfs are forbidden.

Unfortunately, she's crushing hard on the totally hot pure-blood Aiden. But falling for Aiden isn't her biggest problem - staying alive long enough to graduate the Covenant and become a Sentinel is. If she fails in her duty, she faces a future worse than death or slavery: being turned into a daimon, and being hunted by Aiden. And that would kind of suck. 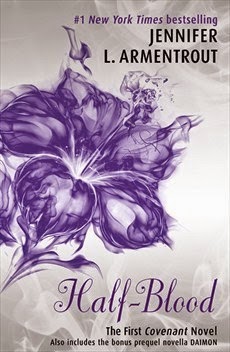 Review:
I'm extremely late joining the party for Jennifer L. Armentrout's Covenant series but I'm going to be catching-up now...and quickly!  I loved this book and I'm desperate to read more because I have a feeling that this is a series where each instalment will keep getting better and better.

The story was awesome and so exciting.  Alex's mother is gone and Alex is back at the Covenant, being trained to become a Sentinel.  When surprising revelations are revealed about her family, her past and her future, everything is about to change.

The romance in this book is off the charts.  Alex is a half-blood being trained to fight by Aiden, an incredibly hot pure blood.  They can never be together but that doesn't stop the air from crackling with tension when they are in the same room or from Alex feeling an undeniable attraction to Aiden which she just can't deny.  I could hardly stand the will they, won't they suspense which is drawn out throughout the book.  I have such a crush on Aiden now!

Daimons, forbidden romance and dangerous secrets, 'Half-Blood' ticked all the boxes for me and was a sensational read.  It was a brilliant introduction to the series which I'm going to be buying now so that I can read them all over the Christmas holidays.  What a treat!

This edition of the book, also includes the prequel novella 'Daimon' which was a really nice addition and provided more insight into the characters' world.
Posted by Samantha (A Dream of Books) at 00:00