Goodreads synopsis:
At sixteen Nash thought that the fight to become Head Girl of prestigious boarding school Bathory would be the biggest battle she’d face. Until her brother’s disappearance leads to Nash being trapped at the school over Christmas with Bathory’s assorted misfits. As a blizzard rages outside, strange things are afoot in the school’s hallways, and legends of the mysterious Beast of Bathory – a big cat rumoured to room the moors outside the school – run wild. Yet when the girls’ Matron goes missing it’s clear that something altogether darker is to blame – and that they’ll have to stick together if they hope to survive. 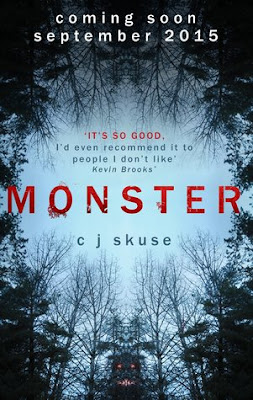 Review:
This book blew me away!  I started it on a two hour train journey and became so engrossed that all I wanted to do was stay on the train, travel home for another two hours and finish it.  Like it's aptly named title, it crept up on me slowly, enveloping me in a cloud of intrigue and suspense.  I felt like my heart was stuttering along with the frayed nerves of the main characters, as foreboding wrapped itself around me.  After the first few chapters, I thought that this was going to be a pretty good book and then suddenly it turned into dynamite in my hands.  No one could have shaken me from the spell I was under.

Now I'm telling myself that I must be mad not to have read anything by C.J. Skuse before.  Have I been living under a rock?!  I have a burning need now to go and buy all of her other books and have a mini-marathon.

I should have known from the tagline 'Malory Towers meets I Know What You Did Last Summer' that I was going to fall hook, line and sinker for this story.  The book suggests that there is a monster living inside all of us - although with some it is let out by choice and with others by necessity.  I am also a sucker for stories set in boarding schools and Skuse presents such an appealing view of this one (monsters aside).  Bathory School for Girls is set in a picturesque location.  There are wonderfully long summer days with trips outside, games and swimming.  There are Hogwarts style houses and secret hidey holes.  It also has it's very own legend stalking the grounds - the Beast of Bathory.

The main character Natasha, or Nash as she is known, hopes to become Head Girl.  She and a small group of others are left behind at the school for Christmas.  Nash's parents are unable to come for her because her older brother is missing abroad.  A blizzard means that they are trapped at the school, but although they can't leave, something or someone wants to get in.

Tense, nail-biting and with one hell of a twist, 'Monster' was my kind of book.  It had an ending that left me wide-eyed and open-mouthed and was deliciously dark and scary.  The suspense kept being ramped up and up until I almost couldn't bear to find out what was going to happen next.  A book hasn't left me on the edge of my seat like that for a long, long, time.  Sheer brilliance and one of the best YA thrillers I've ever read.  Don't hesitate to grab yourself a copy of 'Monster'.  You won't regret it.
Posted by Samantha (A Dream of Books) at 00:00