Stepsister by Jennifer Donnelly, published by Hot Key Books on 2nd May 2019

Synopsis:
Isabelle should be blissfully happy – she’s about to win the handsome prince. Except Isabelle isn’t the beautiful girl who lost the glass slipper and captured the prince’s heart. She’s the ugly stepsister who’s cut off her toes to fit into Cinderella’s shoe ... which is now filling with blood.

Isabelle has tried to fit in. To live up to her mother’s expectations. To be like her stepsister. To be sweet. To be pretty. One by one, she has cut away pieces of herself in order to survive a world that doesn’t appreciate a girl like her. And that has made her mean, jealous, and hollow.

Until she gets a chance to alter her destiny and prove what ugly stepsisters have always known: it takes more than heartache to break a girl. 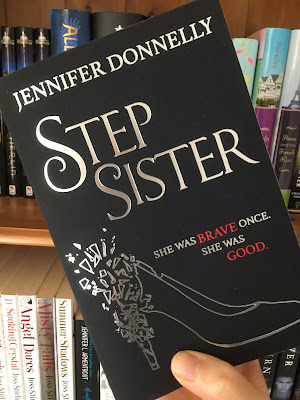 Review:
This book made me so happy! I absolutely adore fairy-tale retellings and while this wasn't strictly speaking a retelling, it was a spin-off of Cinderella with a twist which was so brilliantly executed, that it was a sheer delight to read. It was a lot darker than the traditional tale and instead of focusing on the character of Cinderella and her wooing of the Prince, it centred around Isabella, one of the so-called ugly stepsisters. It picks up from the moment when the sisters try to squeeze their feet into the glass slipper.

I loved everything about 'Stepsister' but particularly the message that people shouldn't have to try to fit in and conform to the norm or peoples' expectations of what they should do or be like. Isabelle has done that her whole life. She has given up everything that she once loved and everything that she once enjoyed doing. She has tried to please her mother over and over again and in the process she has lost who she really is. She has become someone that she hates, allowing her petty jealousy and envy of others to eat away at her.

The premise of the story is that Fate in the form of an old crone, has Isabelle's life mapped out, with an inevitable tragic ending. The character of Chance however, wants to change this and steals the carefully inked out map to give Isabelle the opportunity for a different future. The struggle between Fate and Chance was a really interesting angle, as they wrestle between them to try and get the upper hand. I liked the way that it came across as quite a friendly rivalry at times, even though they both ultimately want to get their own way.

Isabelle, her sister Tavi and their mother are ostracised by the village community, after their treatment of Ella comes to light. Isabelle believes the horrible words that are thrown at her but desperately tries to keep what is left of her family afloat. She longs only to be pretty, like Ella, so that she can have all the things she thinks she wants. Step forward a powerful fairy called Tanaquill, who has the power to grant her exactly that...if it's her true desire and only after she has found the three missing pieces of her heart. The rest of the story unfolds with Isabelle trying to find her true self, while the battle over her future plays out in the background.

I really did love everything about this wonderful book but especially the characters that were brilliantly depicted and grew to feel like friends. If you are looking for a fairy-tale story with a dark and unusual twist then this is definitely one for you. An absolute knock-out YA that is not to be missed!
Posted by Samantha (A Dream of Books) at 00:00