Goodreads synopsis:
Seven is a thief with a difference - he steals downloadable memories from banks and memoriums to sell onto London's black market, trading secrets and hidden pasts for a chance at a future of his own. He makes sure he keeps some special stuff back to 'surf' himself though - it's the only real form of entertainment he can afford. But one night, as Seven is breaking into a private memorium in a wealthy part of London, he is caught in the act by one of its residents; Alba, the teenage daughter of London's most famous criminal prosecutor. Instead of giving him away, Alba promises to keep Seven's secret - as long as he allows her to go memory-surfing herself. In doing so, they discover a hidden memory about Seven's past, revealing a shocking secret about Seven's childhood, the government and a mysterious experiment known as The Memory Keepers... 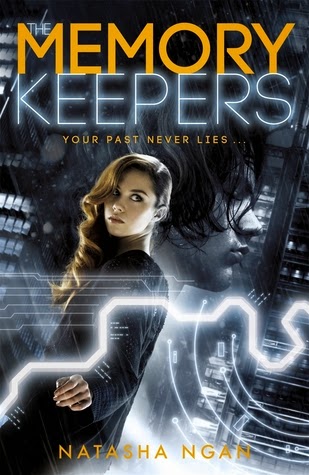 Review:
This is the second book by Natasha Ngan after last year's stellar 'The Elites'.  While I didn't enjoy this one quite as much, it was still a pretty good read.

I thought the concept for the novel was brilliant.  Set in the future, it imagines a world in which people are able to store their memories.  These are then either kept or traded as valuable commodities.  They are even sometimes stolen by criminal gangs, which is where one of the main characters Seven features. I loved the idea of being able to relive your own memories, or experience other peoples' through their eyes.  It's such an incredible idea but Ngan makes you believe that there might come a day when it would be possible.

Seven is a poor teenager living in the South, who is caught trying to steal a memory by Alba, the daughter of one of London's most prominent criminal prosecutors.  In the process he discovers a huge secret about his own past which changes his entire outlook and his future.  I really liked both characters but I particularly enjoyed seeing the story unfold from Alba's point of view.  She is incredibly likeable and although she has an extremely unhappy home life, she never lets it break her and has more grit and determination than she gives herself credit for.

The beginning of the book was a little slow but it picked up for me after a few chapters.  The ending was extremely exciting and there were lots of unexpected surprises along the way which I enjoyed.  As much as I liked reading 'The Memory Keepers' I'm happy that this is a standalone because there are just so many trilogies being published now that it's nice to read a story which gets concluded rather than having to wait another year for the following instalment.
Posted by Samantha (A Dream of Books) at 00:00