The Perfectionists by Sara Shepard, published by Hot Keys Books on 2nd October 2014

Goodreads synopsis:
Mackenzie, Ava, Julie, Caitlin and Parker seemingly don't have much in common. Each has their own friends, dramas and goals. But one thing they do share: they all have a deep hatred of Nolan Hotchkiss. And they all think it's about time he paid for what he's done. They come up with the perfect murder - a hypothetical murder, of course. It's all wishful thinking ... until they wake up one morning to find that their wish has come true. Nolan has been killed - in exactly the way they planned. The thing is, they didn't do it. So who did? 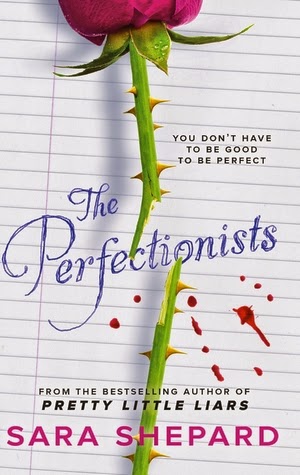 Review:
This book was a really good read which left me puzzling out all the clues and trying to work out who did what.  I'm a big fan of the Pretty Little Liars book and television series, so I was itching to read this new title by Sara Shepard as soon as I heard about it.  The only thing that worries me is that the series will end up being as drawn out and protracted as PLL was.  I like a generous helping of suspense and lots of red herrings and twisty plot turns but I also don't want to get fed-up with being left in the dark for too long.

The story focuses on Ava, Julie, Mackenzie (who was my personal favourite), Parker and Caitlin.  Each chapter is from a different girls' point of view as they get drawn together by their shared actions.  They all have seemingly perfect lives but they are all hiding secrets which they don't want anyone to reveal.  The basic premise of the plot is that Nolan Hotchkiss, a rich kid who they hate, ends up dead at the beginning of the book.  The reader is left to work out who did it and why as the girls find themselves up to their necks in trouble.

There are quite a lot of similarities with the PLL series, least of which being about a group of girls brought together by a dark secret, but I didn't really mind that as the story was so gripping.  I couldn't connect up all the dots but I'm going to enjoy puzzling it all out and trying to discover who the guilty party actually is.

There is a massive cliff-hanger ending in the book which has left me in a state of suspense.  I'm hooked and I desperately need to know what is going to happen to all the girls next.

Deliciously dark and twisty, this is a great read which will leave you wanting more...immediately!