The Power of Six by Pittacus Lore, published by Penguin on 23rd August 2011

Goodreads synopsis:
I've seen him on the news. Followed the stories about what happened in Ohio. John Smith, out there, on the run. To the world, he's a mystery. But to me . . . he's one of us.

Nine of us came here, but sometimes I wonder if time has changed us—if we all still believe in our mission. How can I know? There are six of us left. We're hiding, blending in, avoiding contact with one another . . . but our Legacies are developing, and soon we'll be equipped to fight. Is John Number Four, and is his appearance the sign I've been waiting for? And what about Number Five and Six? Could one of them be the raven-haired girl with the stormy eyes from my dreams? The girl with powers that are beyond anything I could ever imagine? The girl who may be strong enough to bring the six of us together? 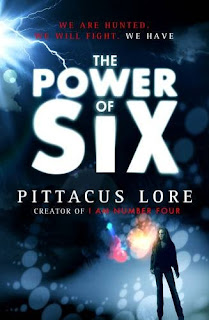 Review:
I've been feverishly awaiting the release of 'The Power of Six' ever since reading and loving 'I Am Number Four' which is the first book in the series and which completely blew me away.  I was captivated by the story of John Smith and his heritage as one of the remaining Lorien Six and have been dying to find out what happens to him next.

Initially, when I knew the second book was going to be about number six I was a bit worried that the focus wouldn't be on John anymore but I needn't have worried because he's still at the heart of the story and much of the action continues to revolve around him as he faces new threats to his existence.  As the next to be killed, he's in an extremely precarious situation and danger follows him wherever he goes.

The narrative is shared between John who is still on the run along with Sam and Six, and Marina, who we're introduced to for the first time as number seven.  Marina is currently living in a convent in Spain, which doubles as an orphanage.  She's been there so long that her Cepan no longer seems to believe in the Lorien legacy and the the threat of the Mogs taking over Earth.  Marina is desperate to leave the orphanage and locate the others, even if it means leaving her Cepan behind.  It was great finally getting to see another of the Lorien survivors and although I started off being more intent on following John's journey, Marina grew on me quickly and soon her narrative had me totally engrossed.

One of the things that I really like about this series is the friendship between John and Sam.  Sam is a human and doesn't have special powers but he's incredibly loyal to John and an extremely good friend.  I love the way in which they each try to help the other out of various difficult and dangerous situations.  There are also some surprising revelations about Sam's dad and I'm looking forward to learning more about these.

Plenty more is also revealed about Six and the story she has to tell is shocking and horrifying.  It was interesting finding out how she'd survived on her own for so long and great to see her in typical kick-ass mode.  I enjoyed the interactions between her and John and the seeing the seed of romance growing between them.

I love these books so much, from the fast-paced and unique stories, to the adventure and excitement which grabs hold from the very first page, to the continual shocks and surprises which are frequently sprung on the reader throughout.  This is a series to rival anything else on the market at the moment and anything else that's come before.  'I Am Number Six' is a breathless, unputdownable book which was mind-blowing and amazing.  Hopefully there won't be too long to wait until the next gripping installment.
Posted by Samantha (A Dream of Books) at 00:00