Goodreads synopsis:
Paige doesn't think she's particularly special, but after getting the starring role in a massive film adaptation of the bestselling Locked trilogy, the rest of the world would disagree. Now she's thrown into the spotlight, and into a world of gossip, rumour and deceit. The only people who know what she's going through are her two male co-stars, and they can't stand the sight of each other. Paige knows it's a mistake to fall in love on the set of a movie, but days of on-screen romance and intensity start to change her mind. The question is, can she keep what happens behind the scenes a secret when the world is watching her every move? 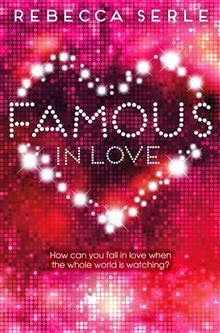 Review:
This book made me instantly think of what it might have been like behind the scenes on the Twilight films, as we get to see how the relationships and romances play out between the three leads on a remote Hawaiin film set.

Paige Townsen is plucked from obscurity to be the lead in the latest YA book to movie adaptation.  On the set she's caught between the gorgeous Rainer and the inexplicable attraction she feels for the enigmatic Jordan.  If you love Young Hollywood then you will enjoy 'Famous in Love' which explores this world in depth, showcasing the real day to day life of the actors away from the glitz and glamour of magazine shoots and red carpet premieres.

I was a bit fed-up of the fact that yet again this book features another love triangle but it was written really well, even if I found it quite easy to make my mind up about the two boys from the very start.  I couldn't quite understand how Paige found herself quite so torn between the two of them.  The story isn't only about romance however.  It's also about Paige being on her own for the first time away from her family and how she adjusts to her new-found independence.  Her relationship with her friends is also shifting and changing and she's having to find her feet in a world which is alien to her.

I enjoyed Rebecca Serle's writing style and I like the way that she really gets inside her characters' heads.  The only thing that spoilt this book slightly for me was the ending.  It wasn't how I wanted the book to finish and even though I think I understand what the outcome was, I'm actually not entirely sure (if anyone else has read it and wants to chat about it, let me know!).

If you're intrigued about the book which is being made into a film as part of the storyline of 'Famous in Love' then good news, you can read an e-novella of 'Locked'.  I'm intrigued enough about it that I think I will be taking a look.