Goodreads synopsis:
Set in the near future, a conspiracy is afoot to create a perfect and perfectly controlled world. The Armstrong Fancy Gift Corporation is a front for the conjoined Armstrong twins, Charles and Benjamin, and the plot to create their own version of utopia. 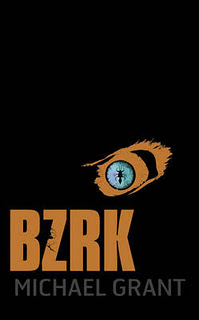 Review:
I’ve never read anything by Michael Grant before but I’ve read so many stellar reviews of his books that I thought it was about time I tried one for myself. BZRK is published by Egmont’s new YA imprint Electric Monkey and is unique because prior to the book’s publication, a six-month long interactive transmedia prequel was launched online, incorporating social media, web sites, blogs, video games and many other mobile devices to develop people’s interest in the characters and the story before actually reading the book. The beauty of this is that people can become as involved as they want to be but the more they interact with the content, the more they’re likely to engage with the story. I think this is a great idea and it would be interesting to know how successful this project has been. It may be something that other authors consider adopting in the future.

‘BZRK’ had a stellar opening which really grabbed my attention and left me wondering what was coming next. A private jet crashes into a stadium full of people and Grant pulls no punches in showing us what happens in gory detail. Although a book for young adults, Grant’s writing, along with the complexity and sophistication of the plot and many of the concepts and ideas incorporated into the novel are not dumbed down at all. This is a book that you need to pay attention to. I have to say that at some points I wasn’t completely sure I understood what was happening and some passages I had to go back to and read again which slightly spoilt my enjoyment of the overall story.

Grant has invented a world where two factions are battling for the future of civilisation as we know it. They’re battling not with conventional weapons but with nano technology. One side controls biots while the other side uses nanobots – designed to be implanted into people’s heads, allowing someone else to control their thoughts, actions and feelings, without them even knowing it. This is a scary idea as it seems impossible at the moment but plausible in the future. There are some explicit descriptions of them entering people’s eyes and brain which definitely had me wincing more than once.

The main fault for me with ‘BZRK’ was that I didn’t feel any real connection with the characters. Many of the people in the book go by code names to protect their identity, but this, combined with the fact that there wasn’t much back story for the two main protagonists, left me with a sense that I never really got to know who they were or their true personalities. There were some interesting and unique secondary characters in the book including the creepy conjoined Armstrong Twins who want to take away peoples’ free will and a mysterious figure called Caligula but no one that I found myself really caring about.

I’ve actually got mixed feelings about the book. I wanted to love it and I was blown away by how clever it was but for me, my favourite books are ones where what happens to the characters actually matters to me and I just didn’t experience that with ‘BZRK’. I am intrigued enough to want to find out what happens next though as there were a lot of plot threads left hanging and I’m curious to see where Michael Grant will take the story next.
Posted by Samantha (A Dream of Books) at 00:00