Goodreads synopsis:
Imagine if you lost your parents - not just in place, but in time. Jake Djones' mum and dad have gone missing and they could be anywhere in the world - at any time in history. Because the Djones family have an astonishing secret, which for years they've managed to keep - even from each other. They belong to the History Keepers: a secret society which travels through the centuries to prevent evil enemies from meddling with History itself. In the quest to find his parents, Jake is whisked from 21st Century London to 19th century France, the headquarters of the mysterious History Keepers, where he discovers the truth about his family's disappearance - and the dastardly Prince Zeldt's plan to destroy the world as we know it... 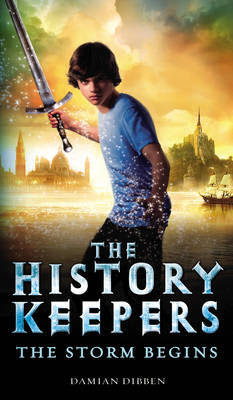 Review:
'The History Keepers: The Storm Begins' is the first book in a brand new series by British author Damian Dibben.  It's a series that's set to appeal to a male and female teen audience and those who are fans of the Percy Jackson books.

The concept of 'The History Keepers' is awesome.  It's about a group of people who can travel back to any point in time and to any significant event or period in history.  Instead of trying to change things, their job is to protect history itself from those who wish to exploit it for their own self-serving motives.  I would love to be able to time travel and explore the events of the past.  Imagine being able to visit your favourite decade or go back and meet famous historical figures.  This is definitely something which will really appeal to readers of all ages.

Jake Djones finds out about the History Keepers after his parents go missing.  He's determined to find out what really happened to his Mum and Dad and in what part of history they're now trapped.  Although just a teenager, Jake becomes a valuable part of the team and helps to unravel a sinister plot by the evil Prince Zeldt to change history and destroy current day civilization.  The other members of the organisation range from young to old and some interesting sub-plots involving these characters are established.

The pace of the story picked up as the plot rapidly progressed in the second-half of the book.  A surprising secret is also revealed about a member of the team at the very end which should prove to be an interesting angle in future installments.

I really enjoyed 'The History Keepers' and book two holds the promise of even more action and adventure.  In Jake Djones a whole new hero is born!
Posted by Samantha (A Dream of Books) at 00:00