Blog Tour: A Will to Kill by RV Raman

Today I'm hosting a stop on the blog tour for 'A Will to Kill' by RV Raman. This is the first book featuring seasoned investigator, Harith Athreya. 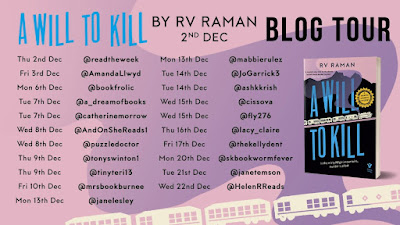 Synopsis:
Ageing millionaire Bhaskar Fernandez has invited his relatives to the remote, and possibly haunted, Greybrooke Manor, high up in the misty Nilgiris.

He knows his guests expect to gain from his death, so he writes two conflicting wills. Which one of them comes into force will depend on how he dies.

When a landslide leaves the estate temporarily isolated, and a body is discovered, Athreya finds that death is not the only thing that the mist conceals. . . 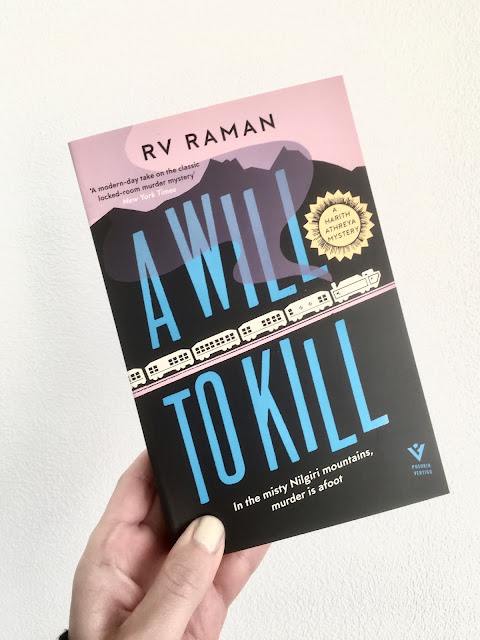 The blurb of 'A Will to Kill' instantly hooked my attention as I absolutely love locked room mysteries and I'm always on the hunt for books inspired by the Queen of Crime, Agatha Christie. I also really enjoy cosy crime novels and this was exactly what I was in the mood to read.
The story is set in India and features investigator Harith Athreya, who is invited to stay at Greybrooke Manor by ageing millionaire Bhaskar Fernandez. The setting was perfect for a mystery as the remote Manor is difficult to reach, even more so when it's cut off by a landslide. It is also veiled in stories of tragedies that have befallen previous owners. I actually don't think I've read a book that has been predominantly set in India before so I enjoyed the change of location and the sense of isolation that was created at the beginning.
The plot revolves around Bhaskar Fernandez, who owns the Manor and wants to put an end to the acrimony between his family - the root cause of which has been battles over money. He has written two wills which will divide his fortune between his relatives in the event of his death. However, which will is used is wholly dependent on the way in which he dies. If by unnatural causes, then he has tasked Athreya with investigating on his behalf.
I thought that the story started brilliantly with a foreboding sense of atmosphere and drama. I had the feeling that something bad was going to happen at any moment and this kept me on the edge of my seat. I was suspicious of everyone and was instantly thinking about motives in my head. There are lots of clues sprinkled throughout; just enough to help you start to put things together but not enough to truly give anything away. I liked the addition of a floor plan and map of the Manor too as these were reminiscent of many Agatha Christie novels. I thought that Raman did a great job of keeping the suspense going until the very end. Although I had a few guesses at who the murderer could be, I was completely wrong, so the conclusion was also extremely surprising.
And those are the best whodunnits! The ones where you really get blindsided at the last moment and can't believe you never saw it coming.
I definitely would have liked to have seen more character development and occasionally I found some of the conversations between people a little stilted. However, I thought that the central figure of Harith Athreya was instantly likeable and I would love to see him in further mysteries in the future.
A Will to Kill is out now, published by Pushkin Vertigo. Many thanks to the team for inviting me to take part in the blog tour.
Posted by Samantha (A Dream of Books) at 16:00 No comments: