I was thrilled to be invited to take part in the blog tour for 'Conviction' by Denise Mina. Thank you to Vintage who gifted me a copy of the book in exchange for an honest review.

Synopsis:
It’s just a normal morning when Anna's husband announces that he's leaving her for her best friend and taking their two daughters with him.

With her safe, comfortable world shattered, Anna distracts herself with someone else's story: a true-crime podcast. That is until she recognises the name of one of the victims and becomes convinced that only she knows what really happened.

With nothing left to lose, she throws herself into investigating the case. But little does she know, Anna's past and present lives are about to collide, sending everything she has worked so hard to achieve into freefall. 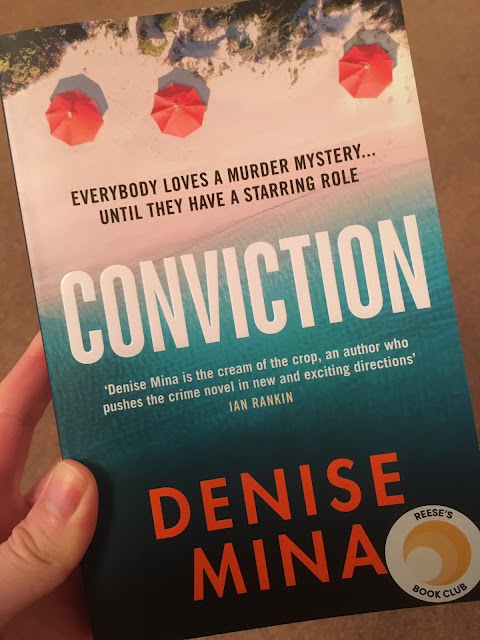 Review:
'Conviction' by Denise Mina arrived at the perfect time. I'm currently immersed in a murder mystery fiction obsession, so I'm keen to discover new authors within the crime genre and I can't get my hands on enough of these books at the moment. Mina is an author that hasn't been on my radar until now but her latest novel is the co-winner of the McIlvanney Prize for Scottish Crime Book of the Year 2019, as well as having been selected for Reese Witherspoon's Hello Sunshine Book Club.

I started reading it on a rainy Sunday morning and literally couldn't put it down. I finished it the same day and would definitely recommend clearing your schedule for this one. It's compulsive reading and the fast-pace of the story makes you want to consume it in one go. Packed full of suspense, the story traverses multiple locations across Europe as the characters go on a rollercoaster ride.

The story starts with the main character confessing that she's not who everyone thinks she is. She once had a different name and a different life and she became used to telling lies about everything. However, now her life has imploded and nothing will ever go back to the way it was before. After the opening prologue, the next time we see Anna she is with her husband and children, listening to a true crime podcast and trying to find escape from her day to day life. She becomes immersed in episode 1 of Death and the Dana until she unexpectedly hears a name from her past; someone who she used to know who is now both a victim and implicated in the crime.

As Anna's life falls to pieces, she seeks an escape in the case and throws herself into investigating the mysterious sinking of the Dana, following multiple threads of evidence which take her from Scotland to Italy and beyond. I was absolutely hooked on this book. I was desperate to know the big secret that Anna was hiding and couldn't wait to discover what she was trying to conceal about her past. I was also intrigued and puzzled about the true and unsolved crime that is at the heart of the novel. I had a lot of theories about what might have happened, none of which I was right about. Denise Mina is a genius at throwing lots of twists and turns into the mix and then wrong-footing you just when you think you have it all worked out.

This is a crime novel that ticks all my boxes. It's exciting, intriguing, suspenseful, chock full of twists and turns that have you on the edge of your seat the whole way through and with a main character whose storytelling draws you deeper and deeper into the mystery. It's intricately plotted and so gripping that you are desperate to keep reading. I wanted to not only find out the truth about Anna's mysterious past but also whether or not she could uncover the real secret about the Dana. There are shadowy evil figures hovering in the background throughout the novel and this adds another layer of danger and tension to the story.

I'm thrilled to have discovered such a brilliant author and I'll definitely now be checking out her back catalogue. I'm also really excited about her next book 'The Less Dead' which sounds fantastic. If you're a fan of this genre or just looking for a compulsive, fast-paced read then get yourself a copy of 'Conviction'. You won't regret it.
Posted by Samantha (A Dream of Books) at 22:58 No comments:

Today I'm taking part in the blog tour for 'Payback' by R.C. Bridgestock. Thanks to The Dome Press for providing me with a copy in exchange for an honest review. 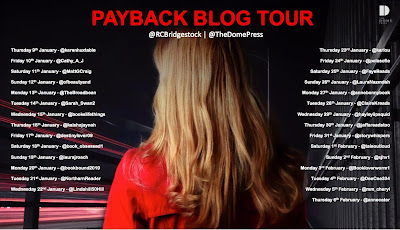 Synopsis:
Charley Mann left Yorkshire for the Met and a fast-track career – but now she’s back, she’s in charge and the area’s first young, female DI.

Her hometown, the Yorkshire countryside, and her old friends all seem unchanged, but appearances can be deceptive.

When a brutal murder is discovered, Charley is forced to question everything, and the interest of her ex – reporter Danny Ray – doesn’t make it easier. 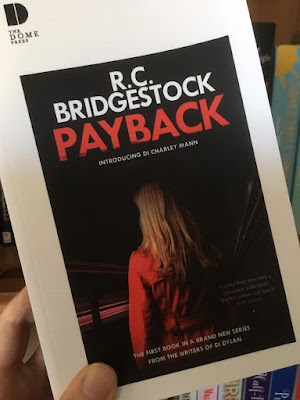 Review:
This is the first book I've read by husband and wife writing duo R.C. Bridgestock. I've heard nothing but good things about their previous novels so I was looking forward to 'Payback' immensely. I don't read heaps of books in the crime genre but the synopsis sounded great and I was in the mood for something gritty and gripping.

'Payback' introduces the character of DI Charley Mann who has recently moved back to her hometown after a stint in London. On her return she has to deal with lots of faces from her past, particularly childhood friend turned reporter, Danny Ray. I really liked Charley and her go-getter attitude. She is tough and feisty and because she was such an interesting character, she carried the story well. There are lots of references to things that have happened in her past which was intriguing and helped to draw me in.

The action kicks off almost immediately with the discovery of a body and the murder investigation is hardly underway before a second body turns up. It's up to Charley and her team to uncover who is responsible and why. I'm not a fan of crime stories which are too graphic but I think 'Payback' got the balance right. There were a few bits that made me slightly squeamish but I'm sure would be right up the alley of any die-hard crime fans.

There are plenty of twists throughout the story which I loved and my brain was definitely working hard trying to figure it all out.

A great read and hopefully R.C Bridgestock will be back with more books about Charley Mann in the future. I think they've come up with a winning character that readers will want more of. 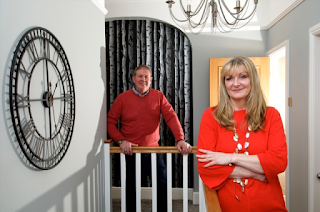 R.C. Bridgestock is the name that husband and wife co-authors Robert (Bob) and Carol Bridgestock write under. Between them they have nearly 50 years of police experience, offering an authentic edge to their stories.

The writing duo created the character DI Jack Dylan, the ninth book of which was published by The Dome Press in 2019, along with their backlist.

Bob was a highly commended career detective of 30 years, retiring at the rank of Detective Superintendent. During his last three years, he took charge of 26 murders, 23 major incidents, over 50 suspicious deaths and numerous sexual assaults. He was also a trained hostage negotiator with suicide interventions, kidnap, terrorism and extortion. Bob was seconded to a protracted enquiry investigating alleged police corruption in another force. He worked on the Yorkshire Ripper and Sarah Harper murder, and received praise from Crown Court Judges and Chief Constables alike for outstanding work at all ranks, including winning the much-coveted Dennis Hoban Trophy.

The couple pride themselves on being up-to-date on past and present day UK police procedures, and as a result, Bob is regularly sought by UK television, radio and national and local newspapers for comment on developing major crime incidents etc. They have also taken part in BBC Radio 4 (Steve) PUNT P.I.

Carol and Bob are also patrons and ambassadors for several charities.
Posted by Samantha (A Dream of Books) at 23:54 1 comment: