The Scorpio Races by Maggie Stiefvater, published by Scholastic on 18th October 2011

Goodreads synopsis:
It happens at the start of every November: the Scorpio Races. Riders attempt to keep hold of their water horses long enough to make it to the finish line. Some riders live. Others die.

At age nineteen, Sean Kendrick is the returning champion. He is a young man of few words, and if he has any fears, he keeps them buried deep, where no one else can see them.

Puck Connolly is different. She never meant to ride in the Scorpio Races. But fate hasn’t given her much of a chance. So she enters the competition — the first girl ever to do so. She is in no way prepared for what is going to happen. 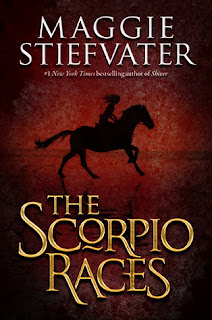 Review:
When I first heard about 'The Scorpio Races' I really loved the idea behind the story.  It's based on the myth of the capaill uisce or water horses who once captured from the sea, are believed to be the fastest creatures to run on the land.  The book is set on the small island of Thisby, where the Scorpio Races take place annually between the terrifying flesh-eating water horses, who may be fast but are also dangerous creatures who have been known to kill their human riders.  Although the premise was amazing, I found that when I started reading I didn't immediately connect with the story which was slow to get going and didn't grip me as I thought it would have.  I kept waiting for it to completely engage me and sweep me away but it never really happened.

What I did like about the book was the beautifully lyrical descriptions of the water horses themselves.  I could sense the love which Maggie Stiefvater feels for these magical beasts in every passage written about them.  I thought she had captured perfectly the image of the thrashing horses, determined to return to their beloved ocean, the salty tang and spray of the sea, the bitter cold of the island itself and the wildness which surrounds it.  It almost felt like another world, separated from the reality of life on the mainland.

The story itself may have fallen a little flat for me, but the characters really grew on me and I particularly liked the blossoming friendship between local girl Puck who lives on the island with her two brothers and the stoical Sean Kendrick.  Both want to win the race for their own personal reasons but there can only be one winner and as they grow closer together, it becomes harder for each of them to imagine what will happen to the one who loses.  Sean has previously won the race four times and is an expert on horses, but is determined to win this time so that he can win his freedom and that of his beloved horse Corr.  I loved the connection between Sean and Corr.  The two have an amazing and genuine bond between them and Sean is the only one who is able to calm Corr and ride him safely.  He puts the welfare of the horses he looks after before anything else and his selfless nature means that he's willing to help Puck to train for the same race he must win.

Puck is headstrong and stubborn and although she feels fear about competing in the races, she won't back down from the challenge.  I loved Puck and her brothers Finn and Gabe, especially Finn who doesn't know how to take a compliment.  Although their parents are both dead and Gabe is set on moving to the mainland, they still felt like a genuine family unit and I enjoyed reading the scenes between the siblings.

It was refreshing to read a standalone YA story for a change, as so many books now seem to be part of a trilogy or a series.  If you love horses then you're sure to enjoy 'The Scorpio Races' or if you're a Maggie Steifvater fan then you'll definitely want to check this one out.  Although the story didn't completely win me over, I did find myself falling in love with the ruggedness of the island of Thisby itself and the ending of the book was absolutely perfectly written.

To celebrate the release of 'The Scorpio Races' I'm giving away a proof paperback copy of the book.  The giveaway is international but you must be a follower of my blog to enter.  Just fill out your details on the form below.  Good luck!