I'm very excited about getting the opportunity to take part in Jessica Warman's blog tour for her fantastic new book 'Between'.  You can read my review here.  I absolutely loved it and am now desperate to read her two previous books, 'Breathless' and 'Where the Truth Lies'. 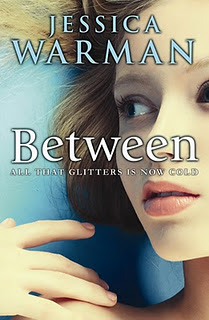 Jessica has written a wonderful guest post so without further ado...

People ask me all the time where I get the inspiration for my characters. It’s funny, because they often have guesses, and most of the time they’re wrong. In particular, my mom always thinks she has everyone’s real-life counterpart figured out. She’ll present her theories to me with such self-satisfied confidence that sometimes I feel bad telling her how badly she’s missed the mark. (If you’re reading this, Mom, I’m sorry.)

In truth, most of my characters are a mashup of many different people who I’ve met in my life. It’s so much fun to pick and choose everything about them – looks, personality traits, family history – that I often end up creating far more background for each character than what actually makes it into the book. But I think that’s fine; actually, I think it’s important. As a writer, the better you know your characters, the more realistic they’ll be to readers.

I’ll admit that, in BETWEEN, there was one character who I based almost entirely on a real-life individual: Richie. It was so important to me that the love story between him and Liz ring true to readers; it’s one of the few things in the book that never really gets corrupted or tainted by the events that take place, and I wanted it to be as realistic and deeply felt as possible. To do this, I tried to think about a love in my life that has been long-lasting and true, one that I could really explore and dig into. So when I created Richie, I used my husband, Colin, as the source material.

Colin and I met midway through our freshman year of college. I’d just transferred to his school, and he lived down the hall from me in my new dorm. The first time I walked into my room, he was sitting on the floor, watching TV with my roommate. As soon as he and I started talking, within the first ten minutes of our conversation, all I could think was: When can I see this boy again?

We quickly became close friends. Even though we were both dating other people when we met, it was obvious to everyone around us that we were losing our marbles for each other. I can remember the first time I ever met his then-girlfriend; I looked at her and thought, “doesn’t she understand that he’s supposed to be with me?” It seemed so obvious, like our being together was the only option that made sense. When we finally started dating a few months later, nobody was the least bit surprised. We dated for a year before getting engaged. A year after that, at age 21, we were married. We will celebrate our ten-year wedding anniversary this May.

One thing I particularly love about Liz and Richie’s relationship is how different they are, yet how well they fit together despite all those differences. My husband and I are total opposites in so many ways. I love to spend my spare time going for long runs; he loves to spend his spare time doing… well, doing pretty much anything besides running. I am hyper-emotional and creative and fussy, while he is calm and logical and easygoing. He loves to play the drums; I can’t stand loud noise. I’m impulsive (if you don’t believe me, you should see the tattoo I got a few years ago on a dare); he’s a planner. Like Richie and Liz, we are completely different on the surface. Yet when we’re together, I feel complete. Somehow it works.

In my wedding vows, I said something to Colin that I think about often. I told him, “You know everything about me. You know the parts of me that I love, and you love them too. But you also see the things about me that I dislike – yet somehow you love those parts of me as well.”

While there were elements to both Liz and Richie’s characters that they might not have encouraged or embraced – for example, Richie’s association with drugs, and Liz’s prissy, often bitchy personality – what I love about their relationship is that they accept those parts of each other, even though they don’t necessarily condone them. They are both so young and so immature in many ways, but together they are able to understand and appreciate each other as whole people, rather than loving bits and parts of each other, but rejecting other parts. They both have so much to learn about life, but somehow they know everything they need to about each other. In short, they know that, somehow, they fit. And they both understand how lucky they are to have found that, especially at such young ages.

It’s an incredible feeling: to look at someone and say to them, “I love you just as you are,” and to truly mean it. When those feelings are reciprocated, that’s when you know you’ve found something that could last forever. It’s something so deep and genuine that almost nothing can destroy it. Not a scheming stepsister. Not a secret. Not a terrible lie.