A Million Suns by Beth Revis, published by Puffin on 5th April 2012

Goodreads synopsis:
The ship's ruler is dead and a rebellion threatens. Amy wants to help Elder as he tries to take charge, but she's torn between her feelings for him and the chaos that's pulling everything apart. As more harrowing discoveries are made about Godspeed, Amy is caught in a desperate race to unravel its secrets. Only one thing is certain.

They have to get off this ship. 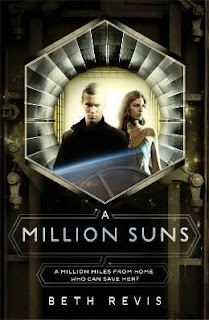 Review:
'Across the Universe' was an outstanding debut by author Beth Revis.  I loved it and couldn't wait or the second book in the trilogy.  I've had a long wait but...it was worth every second because 'A Million Suns' was an incredible read full of mystery, danger, romance and excitement, tempered with the allure of space.

I actually reread 'Across the Universe' before starting this book and I'm glad I did because it helped me to pick up where the story left off.  There's no recap of events at the start so I would recommend reminding yourself of what happened previously.  This also gave me a chance to reconnect with the characters before following them on the next stage of their journey.

The narrative is once again shared between Amy and Elder.  I particularly enjoyed seeing events onboard Godspeed through Amy's eyes as she begins to unravel the secret that Orion had kept hidden for so long.  It's a secret that had me on tenterhooks throughout the book.  I was dying to know what it was and how it was going to influence all their future plans as well as their actual existence.  Revis ramps up the suspense from the opening chapter which left me in a state of great anticipation and wanting to keep on and on reading until I discovered what it was.

The book deals with life on Godspeed and shows what it's like with Elder now in charge and the population of the ship off of the drug Phydus.  Unfortunately things aren't going so smoothly for Elder and he has to cope with the threat of mutiny and general unrest among the people, as well as the food supply running out.  It was interesting seeing the kinds of decisions he made, as well as the fact that although he may not always make the right choice, he's always thinking about what's best for the people in his charge.  He's still growing on me as a character but I like his relationship with Amy and the romance between them which always seems to be bubbling just under the surface.

I was amazed and impressed all over again with the world that Beth Revis has created on the ship, as well as the detail that she applies to every facet of the characters' lives.  I felt totally immersed in the story and the various twists and turns of the plot.

The third book in the trilogy entitled 'Shades of Earth' is published in May 2013.  It's going to be another long wait and I don't know how I'm going to hold out until I get my hands on a copy but I have no doubt it will be just as good if not better than the preceding books in the series.


The wonderful people at Puffin have very kindly provided me with a copy of the book to giveaway.  This giveaway is UK only at the publishers request.  Please fill out all the details required on the form below and good luck!