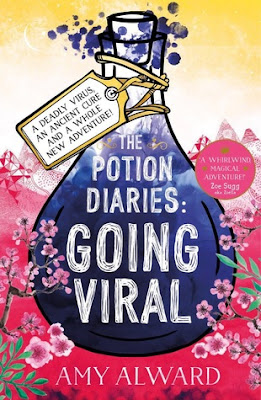 I originally thought that this was going to be the last book in the trilogy but I discovered recently that there is another one scheduled for publication next year.  Maybe the series can still go out on a high.  I'm certainly hoping so.
Posted by Samantha (A Dream of Books) at 00:00 No comments: 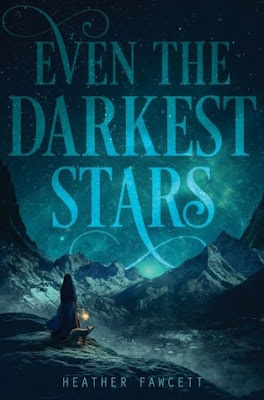 Review:
'Even the Darkest Stars' is the first in a new fantasy duology and is the debut novel of author Heather Fawcett. This book swept me away on a cloud of adventure and danger. I loved it!
I actually found the first few chapters quite slow and I wondered initially whether this was going to my kind of book.  I was dubious about the characters and the plot and very nearly put it to one side.  Thank goodness that I didn't because a couple of pages later and everything clicked into place.  The action kicked up a notch and I was absorbed completely from that moment on.  It was fabulously entertaining for the rest of the book.
The main character Kamzin, agrees to lead the Royal Explorer, River Shara, on an expedition to Raksha, a tall and deadly mountain.  He is seeking a talisman that the Emperor has requested he retrieve.  Kamsin was a fabulous character.  She thrives on adventure and exploration and dreams of scaling new and undiscovered territory across the Empire.  She can be hot-headed at times and doesn't like being told what to do, but she is incredibly loyal and won't back down from a challenge.  I thoroughly enjoyed following her journey and I absolutely adored her Familiar, Ragtooth the fox.
The story was fast-paced and thrilling and there are lots of climactic moments in the book that have you on the edge of your seat.  There is always some kind of danger or peril lying in the path of the characters that they must face and overcome. The book is quite light on romance, although there are hints of it between Kamzin and River and also between Kamzin and her best friend Tem.  I'm quite glad that this took more of a back seat to the main plot as I think it may have distracted from the action otherwise.
The ending was brilliant and really twisted everything and turned it on its head.  I still think there's more to it than first meets the eye but it has left me desperate for the next book in the series now.  I don't always enjoy fantasy but I really, really loved 'Even the Darkest Stars'.  I read it in one sitting on a wet, rainy Sunday where I ended up dreaming about wintery mountains and a dark and magnetising magic.
﻿
Posted by Samantha (A Dream of Books) at 00:00 No comments:

City of Circles by Jess Richards, published by Sceptre on 10th August 2017

Goodreads synopsis:
Danu is a tightrope walker who is mourning her parents, after a disease has ravaged the circus where she grew up. Her mother has entrusted her with a locket that hides a secret.

Over the years, Danu pushes away her grief and develops elaborate and successful high-wire acts with Morrie, a charismatic hunchback who wants to marry her. When the circus returns to Danu's birthplace, Matryoshka, Danu is enchanted by the temples, spice mists, and pleasure seekers within the intoxicating outer circle district.

Will she and Morrie ever be reunited, or will something far more unexpected be waiting for her in the mysterious heart of the city? 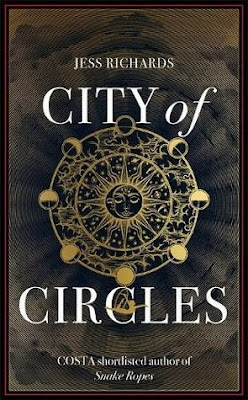 Review:
'City of Circles' is an unusual and unique read.  I hadn't heard a lot about it before reading the novel but I was attracted to it by the premise of the story.  It features a character called Danu, who at the beginning of the book loses both of her parents.  She struggles to deal with her grief within a community of fellow circus performers.  Soon after their deaths, she begins a high-wire act with Morrie, a hunchback performer who loves and wants to marry her.  Danu however, is restless and unsettled; unsure about where she sees her life headed.  When the circus arrives in Matryoshka, the city of 3 circles and Danu's birthplace, she is drawn to her new surroundings and attempts to find the answer to a secret from her past.

There were some things about this book that I loved and others that I wasn't quite so keen on.  I really enjoyed the circus theme which is something that I'm seeing more and more of lately in books.  It's interesting to see characters that are always on the move and with such unique occupations.  There's always something truly magical and mysterious about the circus too.  Although the story is mainly told from Danu's point of view, I thoroughly enjoyed the parts that showed things from Morrie's perspective.  He is a character that I wasn't sure I was going to like at the beginning but he really grew on me throughout the book, particularly as I began to understand more about the depth of his feelings for Danu.

I felt frustrated by Danu at times but she was also a wonderfully interesting protagonist and I loved the second half of the book when she is exploring Matryoshka and all its wonders.  The city was amazing and brilliantly imagined by Richards.  It definitely made me wish that it wasn't purely fictional.

The big disappointment for me was the ending.  It wasn't at all what I was expecting and after such a big build up throughout the story, it felt like a bit of a let down.  This was a real shame because I did enjoy 'City of Circles' and up until the very end I would have gladly recommended it to others.  It felt somewhat rushed and wasn't the conclusion that I was hoping for.
Posted by Samantha (A Dream of Books) at 00:00 No comments: