Teenage Favourites of the Past: Making Out series by Katherine Applegate

I thought it would be fun to look back on and revisit some of the book series that I was obsessed with when I was a teenager. The books that I collected and read often featured the things that I was interested in at the time (cue ballet, horses and boys) and looking back, I can see how they tracked the different stages I went through growing up. I still have many of these books on my shelves now, although sadly, some have disappeared over the years to make way for others.

The first series that I'm going to feature is the Making Out series by Katherine Applegate which was published in 1995 onwards. Now when these first came out, they published one book a month. I can remember going into my local bookshop at the start of every month (and often sending my Mum) to buy the latest release. I was absolutely obsessed with these! There were 28 books in the series and I'm lucky enough to still have the complete set, which one of these days I will reread in full. I actually only recently discovered that Katherine Applegate only wrote the first 8 books in the series and the rest were written by a ghost-writer. I didn't notice any difference in writing style at all at the time. 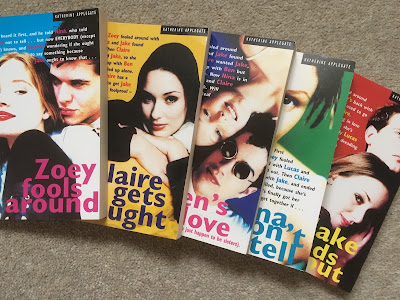 The series followed the lives of a group of teenagers living on Chatham Island off the coast of Maine. They are in their last year of high school before they begin College and take the ferry to school each day. I loved the setting of the books and from then on, I always pictured myself living within a close-knit community on a small island. It seemed so idyllic at the time.
The main character was called Zoey and much of the series centred around her on and off again relationship with a boy called Lucas. They were hands down my favourite couple and I rooted for them from the very beginning. Zoey was the epitome of everything that I thought I wanted to be. She was smart, funny, beautiful, obsessed with writing down quotes about life and love and kind to everyone around her. She seemed to have it all, although she does go through some pretty big stuff in the series.
There's also Nina who is Zoey's best friend. She always has a smart and witty retort ready and although she seems pretty tough on the outside, she's really quite insecure and vulnerable when you get past her defences. Nina has a thing for Zoey's brother Ben, although he's initially dating Claire, Nina's older sister.
You might be detecting a trend here! Everyone dates everyone else at one point or another. But hey, it's a small island! 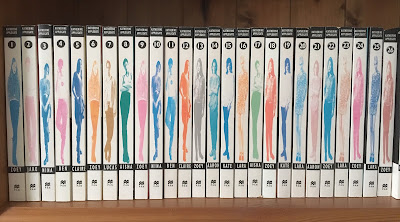 Claire is super obsessed with the weather and can often be found on her widow's walk. She comes across as quite the Ice Queen and I can remember not always liking her very much.
Boy wise, as well as Ben who's blind and super hot bad boy Lucas, there's also local boy Jake. He and Zoey are a couple at the beginning of the series but it was always obvious to me that she should end up with Lucas instead.
Later on in the series, new characters are introduced including Kate, Aisha, Aaron and Christopher. Oh and bad girl Lara who I definitely did not like at all but had four books dedicated to her.
The series actually dealt with some quite hard-hitting topics such as death, divorce, drug and alcohol abuse and the ups and downs of first love. It wasn't always happy sailing on Chatham Island.
This was (and actually still is) one of my favourite young-adult series. I believe the books have all gone out of print now but if you can get hold of it, then I would still heartily recommend it.
Here's the complete list of books in the series:

Email ThisBlogThis!Share to TwitterShare to FacebookShare to Pinterest
Labels: contemporary YA, Katherine Applegate, Making Out, teenage favourites of the past, young-adult
Newer Posts Older Posts Home
Subscribe to: Posts (Atom)