Goodreads synopsis:
Celebrate the most talked about wedding of the year as you colour in Prince Harry and Meghan Markle in this royal romp through the most iconic film scenes in Hollywood history! 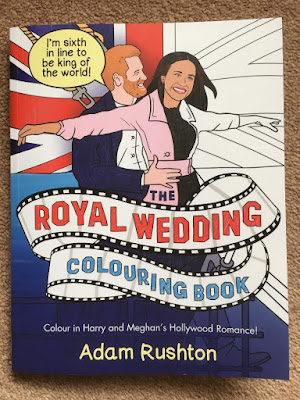 Review:
The Royal Wedding of Prince Harry and Meghan Markle is just around the corner and to celebrate you can colour your way through their romance and engagement. This is such a fun idea for a colouring book and is sure to appeal to all fans of the Royal family.  Meghan and Harry take centre stage in some of the most iconic films of all time, featuring hits such as Titanic and When Harry Met Sally. I laughed a lot at some of the poses and quotes, particularly the one which takes pride of place on the front cover (pictured above).

You can colour in the very moment when Harry proposed to Meghan, or take your pick from shots of the other Royals turning up for the big day. The Queen, Prince Phillip, Prince Charles, Camilla, Prince William and Kate all feature in the book, as well as iconic London images.  You're spoilt for choice really.

This would make a terrific present for any Royal family fanatic and is packed full of brilliant illustrations to colour in.  My Mum had to have a go at colouring the Queen first but I've got my eye on the corgis!  Great fun and wonderfully entertaining!﻿
Posted by Samantha (A Dream of Books) at 06:58 No comments:

Far From The Tree by Robin Benway, published by Simon and Schuster on 8th February 2018

Goodreads synopsis:
Being the middle child has its ups and downs. But for Grace, an only child who was adopted at birth, discovering that she is a middle child is a different ride altogether. After putting her own baby up for adoption, she goes looking for her biological family, including—

Maya, her loudmouthed younger bio sister, who has a lot to say about their newfound family ties. Having grown up the snarky brunette in a house full of chipper redheads, she’s quick to search for traces of herself among these not-quite-strangers. And when her adopted family’s long-buried problems begin to explode to the surface, Maya can’t help but wonder where exactly it is that she belongs.

And Joaquin, their stoic older bio brother, who has no interest in bonding over their shared biological mother. After seventeen years in the foster care system, he’s learned that there are no heroes, and secrets and fears are best kept close to the vest, where they can’t hurt anyone but him. 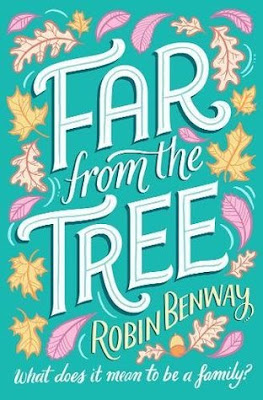 Review:
'Far From The Tree' is a contemporary YA novel which made me cry. Have your tissues handy for this one!

I have to admit that although I really love Robin Benway, I wasn't overly excited about the premise of this book when I first picked it up. It just didn't particularly strike a chord with me.  I picked it up and put it down a number of times before finally settling down to read it and then I quickly became completely immersed in the story and the characters.

The third person perspective, alternates between the three main characters.  There's 16 year old Grace, 15 year old Maya and soon to be 18 year old Joaquin.  Their lives are complicated. They're all adopted and at the start of the book, they are just finding out about the existence of each other.  They all have secrets and issues to deal with.  Grace and Maya were both adopted but Joaquin has lived in foster homes his whole life and has never known what it's like to have a real family.  I really loved the character of Joaquin.  He's scared that he will be rejected by people and is always worried about letting people down.  His defence mechanism is to push people away first before they leave him.  His story is sad but also happy.  Life has been rough for him but he discovers throughout the course of the book that he's not alone and he does have people on his side. I enjoyed seeing the three siblings meeting for the first time and following them as they bonded and opened up to each other.

The book deals with a lot of different issues, such as teen pregnancy, alcoholism, racism and adoption.  It also highlights the complexity of family dynamics.  Families are extremely complicated but ultimately the book shows that families are always there for each other and always willing to help and support each other through thick and thin. The ending of the story was very uplifting and finished on such a positive and upbeat note.

Overall, I thought that 'Far From the Tree' was real and truthful and a good reflection of real life. It has its ups and downs but Robin Benway doesn't sugarcoat anything and shows it as it is. I wish that I hadn't waited such a long time to read it as it turned out to be fantastic and extremely enjoyable.