Blog tour: The Night Sky in My Head - Sarah Hammond

I'd like to welcome Sarah Hammond to the blog today with a wonderful guest post about the inspiration for her debut novel 'The Night Sky in My Head'. 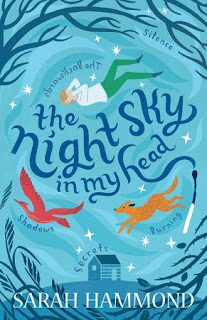 Where does a story idea come from? This is often a difficult question to answer. However, when I wrote The Night Sky in my Head, there was a very obvious moment where the story idea took root and began to germinate in my mind.

It all started with a poem. I heard a brilliant reading of Slow Reader by Steve Voake (from the collection Please Mrs Butler by Allan Ahlberg) and it made me feel furious and indignant on behalf of the protagonist.

I’d never really thought about life from the perspective of someone with learning difficulties and, when I did, I was angry that this character felt so belittled and inadequate because he didn’t see the world in the same way as most other people. For me, this is one of the best things about reading – you look at life through a different pair of eyes, stand in someone else’s shoes for a while, and find another perspective on the world.

I decided there and then that I would write a story for this boy (although the poem doesn’t specify gender, I imagined him as a boy). I would give him something special, a gift that no-one else has.

As I tried to get under the skin of the boy’s character, I decided to use a taunt as the working title for my piece. Titles have an energy to them, even if you change them at a later date (I absolutely love The Night Sky in My Head as a title, but it came after the story was finished). I thought about the horrid things children might say to Mikey - my story-boy had a name by now - and I wrote ‘Backwards’ across the top of my blank sheet of paper.

As I started to write chapter one, I described how Mikey was locked out of the house by accident one evening and how he went down the garden to his shed/den with his dog, Timmer. Then something rather magical happened. I noticed that I was writing odd sentences as I described the world through Mikey’s eyes. I wrote down things like “I’m going to watch the Backwards” or “The world is going swirly – the Backwards is coming”.

What did this mean? I kept writing.

Mikey sat on the floor of the shed and waited. The door opened and his mother walked in. But two things were odd with this scene: first, it was night-time in the story, but the light around Mum was bright as if she was in a pocket of daylight; and secondly, Mum’s hair was the wrong colour. She redyed her hair earlier in the week and her hair was the old colour as she rummaged around in the shed, looking for some jump leads. Her hair was the colour from a few days ago.

A tingle ran down my spine: I realised what was happening. It was one of those lovely story-magic moments. The taunt of the ‘Backwards’ had transformed into Mikey’s special gift: he could ‘see the Backwards’ and the ‘Backwards’ was Mikey-speak for the past. He could see the memory of a place, see events from the past replay for him like a real-life film even though he wasn’t there at the time. He could uncover all sorts of secrets about the past that hide in the shadows…

I had found the bones of my story.