Goodreads synopsis:
Alice Forster talks to her dead sister, Meggie, in the virtual world of Soul Beach – an online paradise for the young, the beautiful and the dead – but paradise can be stifling and the Beach’s guests want to move on.

If Alice can solve the mystery of her sister’s murder then Meggie will be free.

But passions are running high, the temperature’s rising and as Alice gets closer to finding the killer, the killer is getting closer to Alice . . 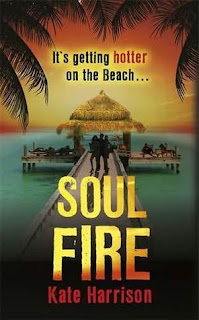 This is the second book in Kate Harrison's fantastic Soul Beach trilogy.  Alice is still trying to solve her sister Meggie's murder.  She has a list of possible suspects but it appears that Meggie's killer may be closer than she first thinks.  Her journey takes Alice from the virtual world of Soul Beach to the hot and steamy climate of Barcelona where danger lurks around every corner.  At the same time she is also trying to help the other guests at Soul Beach such as Javier who wants to be able to move on once and for all.

An event near the start and an online discovery, spark off a chain of events in the book which lead to Alice becoming more and more embroiled in danger.  She's done a lot of growing up since the beginning of the series and is an incredibly brave character but may have just got in over her head this time around.

There are several clues throughout 'Soul Fire' to the identity of the murderer.  I have my own suspicions about who is responsible but I still have a lot of questions to be answered which hopefully will all be dealt with in the final instalment.  I'm convinced that it is going to be the person you least suspect and I'm sure Kate Harrison has plenty more twists to throw into the mix yet.

There is suspense in bucket loads and the tension is held taut throughout the whole book.  The danger crackles around Alice who seems more determined than ever to get answers about Meggie and who can't move on until she has put her sister's death to rest.

Kate Harrison definitely knows how to hook her readers in and keep them gripped.  This was an enjoyable sequel, leading up nicely to the third and final book in the trilogy which I can only imagine will be another explosive read.