Review: Where She Went - Gayle Forman

Where She Went by Gayle Forman, published by Random House Children's Books on 5th May 2011

Now living on opposite coasts, Mia is Juilliard's rising star and Adam is LA tabloid fodder, thanks to his new rock star status and celebrity girlfriend. When Adam gets stuck in New York by himself, chance brings the couple together again, for one last night. As they explore the city that has become Mia's home, Adam and Mia revisit the past and open their hearts to the future–and each other. 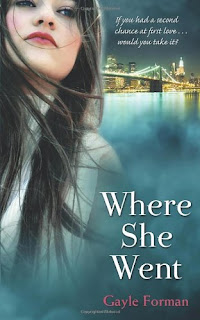 Review:
'If I Stay', Gayle Forman's phenomenal debut novel, was an emotional rollercoaster of a ride.  I went through a box of tissues reading it and savoured every word on the page.  When I heard that there was going to be a sequel to the novel, I was quite surprised as it was so perfect that it seemed impossible that any sequel would be able to live up the original.  However, rest assured that 'Where She Went' tells you everything you wanted to know about what happened to Mia and Adam after the tragic events that preceded it.

I was expecting it to open with Mia and Adam together as a couple.  After all, Adam brought Mia back from the brink of death and persuaded her to stay alive.  That's pretty major to say the least!  However, the book opens with the two of them not having seen or spoken to each other for three years.  Adam's band, Shooting Star, have hit the big time but Adam isn't happy.  Instead he's nervous and edgy and has developed a reliance on cigarettes and pills.  In contrast, Mia has just graduated from Julliard as a cello star and is about to go on tour.  The question the novel poses at the beginning is how did they both end up like this?  What could have possibly happened to have driven them apart?

The story is told from Adam's point of view which I found a refreshing change.  It was interesting to find out more about how he coped after Mia's accident and how he dealt with the loss of her family.  Grief is obviously a key theme throughout and what I particularly liked was the fact that the book showed how someone on the periphery of Mia's family faced their death.  Everyone is understandably concerned with Mia's feelings and how she'll cope with losing her parents and her sibling but a bereavement can affect many people and although Adam has lost them too, he can't show his grief in the same way.

The three year gap also worked well in showing how they have developed as individuals and how their personalities have changed since high school.  Adam has lost his bearings and seems to be floundering without Mia by his side, while through Adam's eyes, Mia seems radically changed and no longer the person that he remembers.  I enjoyed the way in which they gradually have to get to know each other again before they can begin to understand how they fell apart.

I thought that the denouement of the novel was written perfectly and was extremely moving.  It was simple, both in the substance and the way in which Gayle Forman has written it but it really tore at my heart and was so emotional.  Forman's writing is eloquent, fluid and lyrical.  She always gets right to the heart of the story as she pieces together the relationship between Mia and Adam.

If you loved 'If I Stay' then you must read this novel!  I was absolutely enraptured with it and deeply moved by the journey which the characters undergo.  This is a stellar book by an amazing author who I hope to read lots more by in the future.
Posted by Samantha (A Dream of Books) at 00:00