Goodreads synopsis:
Jane and Luca's story continues ...but not quite as they had planned. When challenges and threats from the immortal world of Nissilum rip the young lovers apart, Jane is bereft. Without Luca's dancing green eyes, and gentle smile, Jane feels lost, sad and alone. But then a trip to Paris with her grandmother thrusts her in the path of the amiable Soren - a kindred spirit who may be just the distraction she needs ...Meanwhile in Nissilum, Luca struggles with the loyalties and expectations that come with being a part of the immortal world. A world that is about to be shaken at its very core: rumblings of mounting unrest are spreading, and with rumours of an angel rebellion growing no creature is safe -- especially not a mortal girl who has fallen in love with a wolf boy. 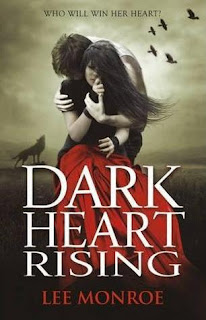 Review:
'Dark Heart Rising' is the sequel to 'Dark Heart Forever'.  I read the latter last year and really enjoyed it, so I was eager to get my hands on this one.  I also wanted to read it because Lee Monroe is a British author and I love to support homegrown writers.

The book starts with Jane and Luca now apart, which I wasn't expecting.  I thought that after the events of the previous installment, we'd finally get to see the two together but it seems not.  Luca is now betrothed to someone else and Jane is nursing a broken heart.  To take her mind off Luca, she joins her grandmother on a trip to Paris, where she meets the enigmatic Soren who has links to Nissilum.  Jane isn't sure if she can trust Soren but he tells her that he can help her get Luca back, so swayed by the thought of being with the boy she loves again, she decides to trust him.  However, Soren is hiding some dark secrets of his own which might endanger the very people that Jane holds dear.

Unlike the first book, I found this one a little slow to completely engage me.  Although I was happy to see Jane again, as I really liked her character, I did get a little annoyed with her at times because she seemed to be making many of the same mistakes over again.  However, I think that is part of what makes her such a unique person.  She's been hurt in the past but she's still willing to trust people and give them a second chance.  The story is largely concerned with Jane trying to get Luca back again which meant that although there were some interesting new characters introduced into the series, we didn't get to see much of Jane and Luca together.  I'm hoping that this will be remedied in the next book.

The majority of the story was set in Nissilum which meant that I got a better insight into how the world works and the laws and regulations on which it has been built.  This was interesting but it also meant that there was a lot less interaction between Jane and her family, which is one of the elements that I previously enjoyed.  In the first book there was a good balance between Nissilum and Jane's home which helped to keep the story grounded and I felt that that was a little lacking this time.

The plot got more exciting as the story progressed and the pace really picked up in the second-half of the book which had plenty of secrets being revealed and lots of twists and turns thrown in.  Overall, although I didn't enjoy this as much as 'Dark Heart Forever' it was still a good read and I'll certainly be looking out for the next book in the series.
Posted by Samantha (A Dream of Books) at 00:00