Goodreads synopsis:
When you're the daughter of the bestselling Queen of Romance, life should be pretty good. But 16-year-old Alice Amorous has been living a lie ever since her mother was secretly hospitalized for mental illness. After putting on a brave front for months, time is running out. The next book is overdue, and the Queen can't write it. Alice needs a story for her mother—and she needs one fast.

That's when she meets Errol, a strange boy who claims to be Cupid, who insists that Alice write about the greatest love story in history: his tragic relationship with Psyche. As Alice begins to hear Errol's voice in her head and see things she can't explain, she must face the truth—that she's either inherited her mother's madness, or Errol is for real. 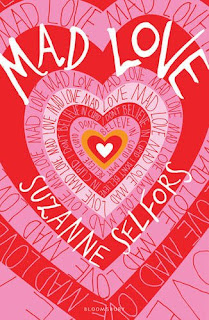 Review:
Suzanne Selfors is a new author to me, but after reading 'Mad Love' I'm definitely going to be checking out some of her other books.  I was really impressed with both her writing style and the plot for this novel which intrigued me from the start.

'Mad Love' deals with the subject of mental illness but in such a way that the book is still a fun and engaging read.  It never felt like Selfors allowed the subject matter to drag the story down and as such I would recommend this book to people who are interested in the topic of depression. The stigma which is often associated with having a mental illness is also touched upon but in a sensitive and well-handled manner.

The main character Alice Amorous is trying to hold it all together after her mother is hospitalised with bipolar disorder.  She tries to conceal this fact from everyone but a few people who are closest to her but in the process she finds that her protective wall of concealment may come crumbling down at any time.  Along the way she meets Errol, who claims to be Cupid and who wants her to write the story of his life with his greatest love Psyche.  Alice isn't sure if she can believe Errol's story and has to face the possibility that she may be prone to inheriting her mother's madness.

The story is about opening up to love and letting in the people around you.  Alice feels like she's alone at times but in actuality she's surrounded by kind and caring people who want to help her.  There's a wonderful cast of secondary characters who live in the same apartment building and there's also a gorgeous love interest in the shape of Alice's skateboarding crush Tony.

This book intrigued me in the beginning but I really wasn't sure if I was going to like it.  However, as it progressed, I found myself loving it more and more and overall thought it was a really fresh and original story with a main character that I loved.  I'm desperately hoping that there might be a sequel to 'Mad Love' as I'd really like to see more of Alice and the wonderful secondary characters who feature in her life.
Posted by Samantha (A Dream of Books) at 00:00