Wereworld: Storm of Sharks by Curtis Jobling, published by Puffin on 21st May 2013

Goodreads synopsis:
The epic Wereworld saga continues as Drew Ferran—werewolf, leader of people, and the rightful king of Lyssia—battles the evil Catlords who seek to oppress the kingdom. As the war’s scope widens, Drew and his allies take the fight to the high seas. But just as many terrors await them on the water as on land, with pirates and scoundrels abounding and a host of previously-unknown werelords emerging to take sides in the war that threatens to destroy the Seven Realms. 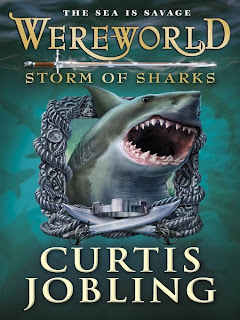 Review:
This is the fifth book in the fantastic Wereworld series by Curtis Jobling and is the penultimate title. I don't know what I'm going to do when it's all over because I've loved it so much.  It's going to leave a big void in my reading calendar as I always look forward to each new instalment being published.

The story picks up with Drew still fighting for Lyssia's freedom while his allies are scattered and his enemies closing in.  The action packed storyline grabbed me by the throat from the opening chapter and never let go the whole way through.  I thoroughly enjoyed the scenes in the book which took place at sea.  I'm also a fan of Vega the Sharklord and I thought the twist involving him and Casper was perfectly executed.  I certainly didn't guess the truth about them both.

Whitley has gradually become one of my favourite characters.  She has really grown and matured and is now quite a force to contend with.  There is a romantic undercurrent between her and Drew and I enjoyed the fact that Drew may be a Werelord but he's still pretty clueless sometimes when it comes to the opposite sex.

I'm looking forward to seeing Trent and Drew finally reunited.  It will be interesting to see what kind of reunion the two brothers have, particularly now that Trent has grown much closer to Gretchen.

I've been Team Hector from the word go and have always believed that he will finally be redeemed.  He comes tantalisingly close to this but Jobling still leaves us hanging about whether or not Hector can ever truly make amends for his actions.  I'm hoping so because I always think back to the type of person he was at the start and those qualities must still be buried deep inside of him.

I've been a fan of this series from the very beginning and I'm so attached to all the characters and the world that Curtis Jobling has created.  He literally never takes his foot off the gas with some superb storytelling!  I'm excited to find out how it's all going to end in 'War of the Werelords' which is being published in October 2013 but I'll also be extremely sad to wave goodbye to the world of the Seven Realms.
Posted by Samantha (A Dream of Books) at 00:00