Today I'm taking part in the blog tour for 'Scissors, Sisters and Manic Panics' by Ellie Phillips.  Ellie has written a fantastic guest post about the setting of the book so you can visit some of the places that are special to the main character Sadie. 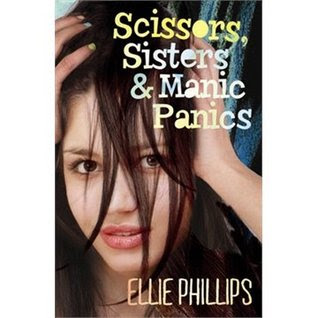 Both Dads, Geeks and Blue-Haired Freaks and its sequel Scissors, Sisters and Manic Panics are set in East London – for those keen on a postcode; E9, and for those who know E9; – Vicky Park to be even more precise.

If you don’t know Victoria Park it’s a little oasis – one of the biggest parks in the East End of London. These days it joins onto Mile End Park via a ‘green bridge’ that was built as a project for the millennium I believe. So it’s a vast green space, often used for concerts and ‘happenings’ these days like ‘Lovebox’ and ‘Underage’ and ‘Field Day’. I lived right by the park – at Mile End and later in E9 for a number of years and there was always something going on around there. There were heaps of kids – there was a school on Victoria Park Road, and it felt as if there was life and drama everywhere. Oddly, even though it was slap bang in the middle of London, the area itself felt small and enclosed – flanked by a park at one end and by a main road at the other – quite like an island. I’m not going to use the word ‘village-y’ or I start to sound like an estate agent. But it felt self-contained and manageable as a location for a novel.


I am very bad at geography, maps and just about anything that requires me to visualise spaces. So I had to use the space I was living in at the time to set my novel in. I imagined looking at it through my heroine, Sadie’s, eyes because I know those streets so well. I know all the businesses around those streets too – so that helped. There are characters who appear in the books who are completely real; Ken from the Newsagents, the 50p Lady, Colin from the Vietnamese restaurant - they are all real.

In Scissors, Sisters and Manic Panics there’s quite a lot set along Roman Road in Bow - where the salon Stylee Stylee is situated. And again, this is a road I know well – with its schmatter market and shops, so it was very easy for me to visualise Sadie’s view out of the shop window as she washed and swept and foiled up the clients.

I like to think that Sadie is a realistic character from a realistic setting. She’s a great, confused ethnic combination for one thing – just like the East End used to be and still is in parts - and with that combination comes colour and noise and a clash of cultures. There’s also grim determination in there – Sadie aspires to leap beyond the bounds of her milieu. She’s also a bit dismissive of, for example, what her Aunt has built up with her hairdressing business. Sadie wants something decidedly more shiny and exciting. The East End of London – especially that particular pocket of Hackney, E9 – has changed so much even over the last 10 years with all the young incomers and new businesses, I think it must have an affect on young people growing up there. There will be some who feel alienated and pushed out of ‘their area’ – and quite rightly so, but there will be others, like Sadie Nathanson, who see the glamour and the shine of the new businesses and the fashionable incomers, and who just want a piece of it.

Ellie has also created a brilliant hair-quiz here.  Give it a go and see if you are a sister of the scissors or a manic panicker.
Posted by Samantha (A Dream of Books) at 00:00