Today I'm taking part in the blog tour for the third exciting installment of Curtis Jobling's awesome Wereworld series.  The third book is called 'Shadow of the Hawk' and continues to follow Drew Ferran's action-packed adventure in the Wereworld universe. 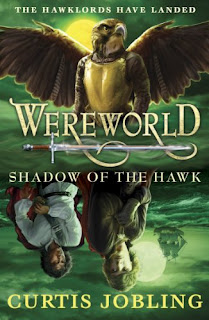 Curtis has written a fabulous guest post today all about Arik and Balk, the wereapes who feature in the series.

"Few gladiators enter the Scorian Furnace delighting in the grisly work they undertake, but the Apelord siblings are two such characters. Revelling in the adulation of the masses, Arik and Balk are responsible for the deaths of many humans in the Lizardlords’ arena, in addition to a number of therianthropes. The brothers were sold to Ignus by their own father, so fearful was he that the two of them meant to murder harm – patricide is not uncommon in Wereape society, a well-practised means of succession for this warring, therian bloodline. With the promise of glory, fighting for Ignus, Arik and Balk have thrown themselves into the roles of the people’s favourite gladiators, killing for the pleasure of their master as well as themselves. While other Werelords despise the fact that they must fight for the amusement of the Lizardlord, Ignus, Arik and Balk delight in their work.

Not the brightest of characters, the hulking Wereapes’ chests, backs and arms are a mass of muscles. Each brother cuts a brutal sight even in human form, their enormous arms and shoulders covered in a tangle of unsightly black hair. When changed into their frightening therian form, they have the addition of savage canines that can rip chunks of flesh from any foe. Cruel and conniving, Arik and Balk work as a tag-team, using their combined strength and ferocious attacks to bring down their enemies. Their battles aren’t restricted to the arena either – on more than one occasion the brothers have brought about the deaths of their enemies in the training ludus, away from the eyes of an audience. Thugs and bullies of the worst kind, they take great pleasure in tormenting their opponents, both physically and psychologically, enjoying nothing more than teasing and taunting any new blood that arrives in the Furnace. What might they make of a Werewolf in their midst?

Author’s note: I’m a BIG fan of the old Planet of the Apes films from yesteryear (although, that said, best not to bring up Battle for the Planet of the Apes – best to draw a veil over that monstrosity). Bullies and braggarts strike a resonant chord with most readers, something that each of us had no doubt endured at some point during our lives. We all remember that feeling of being trapped when cornered by such a character, the dread at what might come. I was quite lucky in my school-life, able to make the brutes laugh – distraction techniques are winners, especially a little song and dance number – but such luxuries are in short supply for Drew in Wereworld. Drew’s been a young man who always stands up for the little people – he’s been that way since RISE OF THE WOLF and now, in volume three of the series, he’d unlikely to have changed his outlook. The Wereapes provide my hero with an enemy who, though physically more powerful, are a step behind him in the smarts-stakes. This leaves Drew depending upon his quick wits, but also seeking the help of his brother gladiators."
www.curtisjobling.com

Also make sure you check out the Spinebreakers website throughout the week where you can enter their ‘Friday 13th’ ‘Wereworld lucky for some’ competition!
Posted by Samantha (A Dream of Books) at 00:00