Sword of Light by Katherine Roberts, published by Templar on 1st February 2012

Goodreads synopsis:
It is the darkest hour of the darkest Age. King Arthur is dead, killed by his wicked nephew, Mordred. Saxon invaders rampage across the land and forces of evil are gathering. The path to the throne lies open to Arthur's only remaining flesh and blood - Mordred. But there is one with a better claim than Mordred - Arthur's secret child. Brought by Merlin to enchanted Avalon as a baby and raised there for protection, the king's heir must take up a vital quest: to search for the four magical Lights with the power to restore Arthur's soul to his body. Introducing Rhianna Pendragon: unlikely princess and Camelot's last hope. 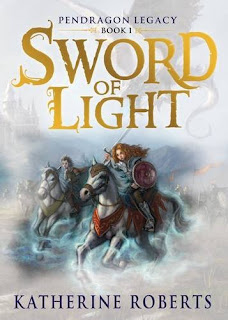 Review:
This is the first book in a new series called The Pendragon Legacy.  I'm a massive fan of stories which are set in Arthurian England and I absolutely adore all the legends and tales about King Arthur and his court.  I'm always on the lookout for new books on this subject so I was thrilled when I discovered this title.

Katherine Roberts expertly weaves Arthur's story and that of the Knights of the Round Table, Merlin, Mordred and co with a new character, Rhianna Pendragon.  Rhianna is the secret child of Arthur and Guinevere who was taken to Avalon by Merlin when she was a baby to protect her from those who don't wish to see an heir to the throne.  She also happens to be the only hope against the evil Mordred who is being helped by the wicked Morgan Le Fay.  Rhianna isn't alone though, she has her best friend Elphin by her side who is the Prince of Avalon and has a fair share of magic of his own to help guard her.  I loved the friendship between Rhianna and Elphin and the fact that they would do anything for each other.  I wonder whether the friendship they share will blossom into love later in the series.

The story is tremendously exciting and follows Rhianna's quest to find the Sword Excalibur, the Lance of Truth, the Crown of Dreams and the Holy Grail.  Rhianna meets innumerable obstacles along the way but she never gives into defeat and makes a worthy heroine.  I would have liked to have seen Rhianna meet Guinevere, but I assume this is being saved for the next book, as is our first encounter with Lancelot who is mentioned but never actually seen in person.

Set in a lost age of chivalry and magic, 'Sword of Light' combines wonderful storytelling with an engrossing tale of Knights, Kings, Queens and Princesses.  I found the legend of King Arthur coming alive before my very eyes and I loved every second of reading it.  Katherine Roberts has breathed new life into a story which many people are familiar with and for those who aren't, then she's introduced a whole new readership to King Arthur and all the characters of legend.  I look forward to getting my hands on the sequel as soon as it's out!
Posted by Samantha (A Dream of Books) at 00:00