The Weight of Water by Sarah Crossan, published by Bloomsbury on 5th January 2012

Goodreads synopsis:
Armed with a suitcase and an old laundry bag filled with clothes, Kasienka and her mother leave Poland and head for the UK to find her father. Life is lonely for Kasienka. At home her mother's heart is breaking and at school Kasienka finds it impossible to make new friends. While the search continues, Kasienka is kept afloat by William, a boy she meets at the local pool who understands what it means to lose someone and who swims with Kasienka towards her new life. 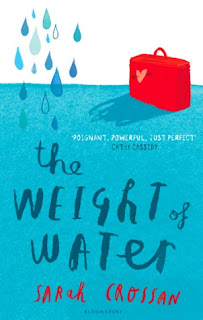 Review:
This is the first book I've read which is written entirely in verse.  I thought at first that I was going to find that difficult because I imagined it would feel disjointed to read but in actuality the verse flowed beautifully, the story unfolded smoothly and each separate verse was interconnected to the next so in some ways it was just like reading normal prose but with even more lyrical prowess.

The story is about a young girl called Kasienka who comes to England with her mother, to seek her father who left and abandoned them.  Her mother is desperate to find them and believes they can do so by trawling the streets with a map and knocking on people's doors - just one of the many touching and heartbreaking moments in the book.  Kasienka is bullied at school by another girl called Clair for being too white, having too short hair, having the wrong bag but essentially for being different.  She eventually finds peace with a new friend and a boy called William who she meets at her local swimming pool.

Swimming is Kasienka's solace and it's when she's in the water that she feels sleek and self-assured and she can momentarily forget the many troubles which weigh heavy on her young shoulders.  I loved the way in which her character develops throughout the book and although she has many issues to face she does so with her head held high.

The book is about immigration and alienation and trying to fit in with people who judge you on appearance without getting to know the real you and the person inside.  Kasienka has to deal with peoples' prejudices, even those of the adults around her and an example of this is the way that she's initially put in a lower grade at school because her English isn't fluent but in reality she's actually extremely bright and intelligent and capable of studying at the same level as other people her age.  The story teaches us to be accepting of people from different cultures and to not make snap judgements about others.

I thought 'The Weight of Water' was extremely moving and a powerful read which really touched me.  I was drawn into the story and felt a great sense of empathy for Kasienka.  Although this isn't normally the sort of book I'd pick up as the subject matter isn't one which would usually appeal to me I found it a lovely debut by an exciting new talent.
Posted by Samantha (A Dream of Books) at 00:00