Review: The Titan Prophecy: Rise of the Dark One - AM Crawford

The Titan Prophecy: Rise of the Dark One by A.M. Crawford, published by Murray McLellan on 17th August 2011

Goodreads synopsis:
Charlie and Max had a choice: take a short-cut through the forbidden grounds of a remote gothic mansion or get home after dark and face the wrath of Charlie’s mother. They decide his mother is the greater risk. Of course, that was before they entered the grounds...Soon enough they find themselves caught up in an adventure neither of them could ever have imagined...

For there has been a prophecy, The Titan Prophecy, warning of a great war: a war that will be fought on earth; a war that could destroy the whole universe. And says this prophecy there is only one hope of salvation: a Destined One. A Boy... 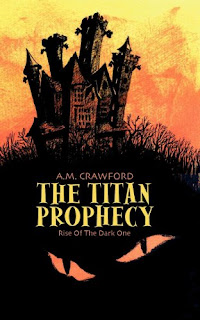 Review:
'The Titan Prophecy: Rise of the Dark One' is a thrilling adventure ride through the world of ancient Greece.  The book interweaves many well known Greek myths and legends such as Jason and the quest for the golden fleece, as well as featuring familiar names such as Hades, God of the Underworld.  This was one of my favourite aspects of the book, as not only did this appeal to the part of me that's hooked on the stories of ancient powerful Gods but it managed to be educational and informative (in a fun way!) at the same time which is a credit to debut author A.M. Crawford who has obviously done her research.  The only thing I thought was that occasionally there seemed to be a few too many characters introduced in quick succession and an explanation had to be provided for each God to ensure that the reader knew who they were and why they were well known in history.  Sometimes this felt like a lot to absorb all at once.

At first glance this title could be seen as similar to the Percy Jackson books by Rick Riordan which also feature a boy hero but 'The Titan Prophecy' stands apart as an amazing and enjoyable read in it's own right.  I picked this one up only intending to read the first few chapters and ended up becoming so immersed in the story that before I knew it I was half way through.  There were also some gripping cliffhangers and some shocking twists at the end of many of the chapters which invariably had me reading on for just a couple more pages.

The story opens by introducing the main character Charlie and his best friend Max.  Before long their lives are dramatically changed when they discover that an ancient prophecy foretells that Charlie alone will be the saviour of the Gods who are threatened  by the Titans rising up and waging war on them.  Not only that but Charlie is being sought after by the Dark One, a shadowy sinister form who's acting as the Titans' assassin.  He's guided on his journey by a Time God by Parseus, allowing the action to move between the present day and ancient Greece.  I was pleased to see that the time discrepancy was dealt with and an explanation was provided to how time moves differently between the worlds.  This meant that the characters and plot could move swiftly backwards and forwards without leaving the reader wondering why no one had noticed they'd disappeared.

Taking place on land and at sea, there was plenty to keep the reader on the edge of their seat for much of the book.  I really liked the modern day setting of the small village of Hesper and the creepy old Hesper House which stands forebodingly over the hell realm.

I would definitely recommend this book to those who love stories set in and about ancient Greece and those who are looking for an exciting and thrilling read.  There's non-stop action as Charlie faces one peril after another but as all good boy heroes do, he never gives up!  The first in a series, I look forward to finding out whether or not Charlie really can save the day.
Posted by Samantha (A Dream of Books) at 00:00

Email ThisBlogThis!Share to TwitterShare to FacebookShare to Pinterest
Labels: AM Crawford, review