The Vampire Stalker by Allison Van Diepen, published by Scholastic on 3rd November 2011

Goodreads synopsis:
What if the characters in a vampire novel left their world--and came into yours?

Amy is in love with someone who doesn't exist: Alexander Banks, the dashing hero in a popular series of vampire novels. Then one night, Amy meets a boy who bears an eerie resemblance to Alexander. In fact, he IS Alexander, who has escaped from the pages of the book and is in hot pursuit of a wicked vampire named Vigo. Together, Amy and Alexander set out to track Vigo and learn how and why Alexander crossed over. But when she and Alexander begin to fall for each other, Amy wonders if she even wants him to ever return to the realm of fiction. 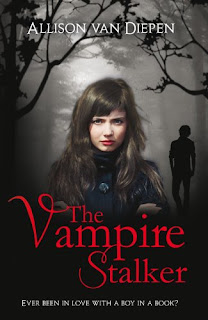 Review:
The tag line for 'The Vampire Stalker' says it all really- "Ever been in love with a boy in a book?".  I'm sure that the majority of people would answer that question with a resounding yes, myself included!  This is definitely the book to read if you've ever found yourself with a huge crush on that cute boy in the pages of your favourite story.

Amy is an avid reader and a huge fan of the Otherworld books by author Elizabeth Howard which feature a vampire hunter called Alexander Banks and follows his quest to rid the city of the evil vampire Vigo.  After Amy is nearly attacked one evening, she's saved by a handsome stranger who resembles Alexander in every way - which turns out to be because he is Alexander and no longer just a character in a book.  Amy has to help him hunt down Vigo but finds herself falling in love with her favourite character who is now very much flesh and blood.

This is such a great idea for a story that I couldn't help wondering why no one had written something along these lines before.  I hadn't heard much about the book prior to reading it either but it caught my eye on the shelves in my local bookshop.  The plot was well executed and the book was fairly short which meant that the tempo was high from the moment that Amy first sets eyes on Alexander.  I thought that the romance between them was really sweet and I loved seeing her introduce him to all the modern day inventions that we take for granted such as mobile phones, the Internet and television.  He actually gets to grips with all these pretty quickly!  The eventual scientific explanation about how he came to be in Amy's world was clearly explained using the premise of literary physics which was both clever and interesting.

I also loved the fact that one of the main characters was a fabulous librarian who helps Amy to make sense of everything happening.  Ms P was great and a brilliant advocate for librarians who are geniuses at being able to help track down any information needed.  It's nice to see a positive image of a librarian for a change instead of the usual stereotype.

'The Vampire Stalker' was a fun and entertaining read that I devoured in one evening and left me wanting more.  My only complaint is that the book was quite short and I would have liked to have had more time to spend with all the characters and see what happens to them next.  Fingers crossed that there might be a sequel in the offing.
Posted by Samantha (A Dream of Books) at 00:00