Daisy’s mum is gone. Her dad refuses to talk about it and as far as Daisy’s concerned, it’s all her fault…

Saving Daisy is a powerful and moving story that follows the life of Daisy Houghton who first featured in Phil Earle’s critically acclaimed debut, Being Billy.

As Daisy struggles with misplaced guilt over her mother’s death, she turns to extreme and violent measures and soon her life starts spiralling out of control. This leads to tragedy and suddenly Daisy finds herself left all alone. But sometimes the kindness of a stranger can turn things around. A stranger who desperately wants to save Daisy – if she’ll only let herself be saved. 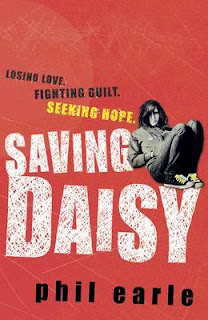 Review:
'Saving Daisy' is an emotionally charged and powerful read from the British author of 'Being Billy'.  Be warned now that you'll need to have a box of tissues beside you while you're reading this book because it will rip your heart out.

Phil Earle's writing is unflinchingly honest.  He's not afraid to tackle difficult or emotive topics such as death and bereavement, rape, bullying, drinking and other such issues.  His background as a care worker is obvious here when reading about the main character Daisy and the experiences she goes through.  He writes sensitively about her and her issues, whilst also portraying a realistic view of life in a therapeutic community for teenagers.  I thought the relationship she had with her key worker Ade was one of great trust.  It was obvious that not only did Ade care deeply about Daisy and her road to recovery but it was touching to see how much Daisy came to value Ade's friendship by the end of the book.

Some parts of the story made for difficult reading and it was hard at times to see how much Daisy blamed herself for not only her mother's death but also for many of the things that happen to her.  Trying to correct the way she thinks about herself and establish a more positive outlook for the future is one of the struggles that she has to face.

I found the ending and overall message of the book to be full of hope, showing that there's always a way through the pain for everyone, no matter how bleak a person's future can look and no matter what someone has had to go through.  'Saving Daisy' is not a light read but it's one that will stay with you long after turning the last page.  It's heartbreaking at times and will take you on an emotional rollercoaster of a ride but it's worth every second and is a book I would definitely recommend to others.
Posted by Samantha (A Dream of Books) at 00:00