Review: All the Stars and Teeth by Adalyn Grace

Synopsis:
As princess of the island kingdom Visidia, Amora Montara has spent her entire life training to be High Animancer - the master of souls. The rest of the realm can choose their magic, but for Amora, it's never been a choice. To secure her place as heir to the throne, she must prove her mastery of the monarchy's dangerous soul magic. When her demonstration goes awry, Amora is forced to flee. She strikes a deal with Bastian, a mysterious pirate: he'll help her prove she's fit to rule, if she'll help him reclaim his stolen magic. But sailing the kingdom holds more wonder - and more peril - than Amora anticipated. A destructive new magic is on the rise, and if Amora is to conquer it, she'll need to face legendary monsters, cross paths with vengeful mermaids, and deal with a stow-away she never expected... or risk the fate of Visidia and lose the crown forever. 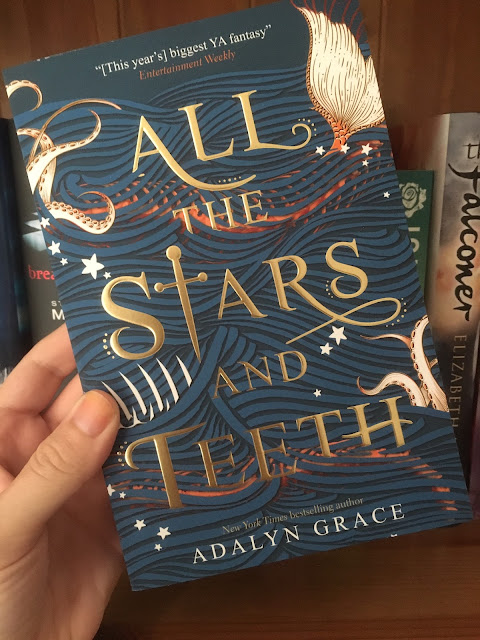 Review:
'All the Stars and Teeth' is a YA fantasy with a powerful and flawed Princess, a cursed pirate called Bastian, adventure and danger on the high seas and an abundance of magic. It is a fast-paced and exciting opening to a duology which weaves a compelling tale about the abuse of power and how one girl attempts to save a kingdom.

I enjoyed it because it was so unique and different to anything else that I've read recently in the YA fantasy genre. The story was unpredictable and the characters were multi-faceted. Nobody was completely good or bad and that made everything much more interesting. Case in point is the so-called heroine of the story, Amora Montara. She has spent her whole life readying herself to follow in her father's footsteps and become the High Animancer. She is devoted to her people but also longs for adventure and wants to explore the other islands that make up the kingdom of Visidia. When the test to prove that she is fit to be the heir to her father's throne goes horribly wrong, she flees the island, looking for a way in which she can win back the peoples' trust and make a triumphant return.

She's a fiesty and headstrong character but has always listened to her father's guidance and done her best to make him proud. She has grown-up being taught about the magic she holds within her but as events start to unravel she discovers that there is more than one side to the story of the Montara's rise to power. She does a lot of questionable things in the book, not all of which I agreed with but I think that makes her seem so much more real and easier to identify with.

I also loved the character of Ferrick who she is reluctantly engaged to and who is a healer with the ability to do pretty cool things, such as regenerating body parts. Vataea is pretty awesome as well but Bastian, the pirate who Amora escapes with, was definitely my absolute favourite. I'm pretty obsessed with pirate books generally but Bastian and his ship the Keel Haul gave me everything that I long for in a good pirate book. There's some love/hate sparks between him and Amora going on throughout but the romance never swamps the rest of the story. It sizzles away in the background and then flares to life at particular moments in the book which may just have been among my favourite bits.

Adalyn Grace has done a terrific job of the world building. There's a handy guide in the beginning of the book to the kingdom of Visidia which I found helpful in keeping track of the different places that they visit throughout the story. Each one is more fascinating and magical than the next. I especially enjoyed their trip to Mornute, the island of enchantment magic but also Kerost, where the people have the ability to control time.

The ending was hugely intriguing and contained a great plot twist which sets things up nicely for the next book, 'All the Tides of Fate' which will be published in 2021.
Posted by Samantha (A Dream of Books) at 07:15 1 comment: