Two Can Keep a Secret by Karen M. McManus, published by Penguin on 10th January 2019

Goodreads synopsis:
Ellery's never been to Echo Ridge, but she's heard all about it. It's where her aunt went missing at age sixteen, never to return. Where a Homecoming Queen's murder five years ago made national news. And where Ellery now has to live with a grandmother she barely knows, after her failed-actress mother lands in rehab. No one knows what happened to either girl, and Ellery's family is still haunted by their loss.

Malcolm grew up in the shadow of the Homecoming Queen's death. His older brother was the prime suspect and left Echo Ridge in disgrace. His mother's remarriage vaulted her and Malcolm into Echo Ridge's upper crust, but their new status grows shaky when mysterious threats around town hint that a killer plans to strike again. No one has forgotten Malcolm's brother-and nobody trusts him when he suddenly returns to town.

Then another girl disappears, and Ellery and Malcolm were the last people to see her alive. As they race to unravel what happened, they realize every secret has layers in Echo Ridge. The truth might be closer to home than either of them want to believe. And somebody would kill to keep it hidden. 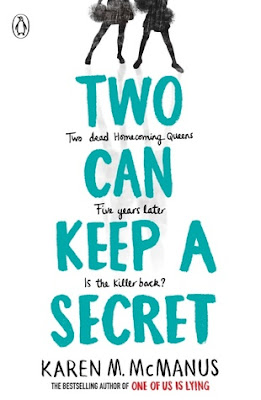 Review:
I'm on a big murder mystery kick at the moment so Karen M. McManus's new book, 'Two Can Keep a Secret', was exactly what I was looking for. Unsolved murders, a killer on the loose and homecoming Queens turning up dead - it ticked every single one of my boxes. Plus I absolutely loved her debut 'One of us is Lying', so I was more than a little bit excited to read her new thriller.

The story is set in the small town of Echo Ridge, where twins Ellery and Ezra are headed to live with their Grandmother while their mother is in rehab. The town itself is small enough that everyone knows everyone and trying to keep secrets buried is an impossibility. The narrative alternates between Ellery and local teenager Malcolm, whose brother was a previous suspect in the disappearance and murder of a local girl at the Murderland Halloween Park.

There are some great characters in the book, my favourite being Ellery. She has a fascination with true crime and has always wondered what really happened to her Aunt Sarah who vanished when she was a senior in high school. Ellery is extremely perceptive and as an outsider to Echo Ridge, is able to view things with an unbiased and fresh perspective. I wish that we could have seen more of Ezra in the book as I felt like I never really got to know him properly, which for me, kind of wasted the twin angle somewhat.

I enjoyed puzzling over the deaths and disappearances in the story and while it wasn't as twisty and complex as McManus's debut, it still kept my brain busy trying to put all the clues together. I went through a myriad list of suspects as I kept changing my mind about who was responsible and why and I only guessed the culprit just before it was revealed.

Besides wanting to see more of Ezra, my only minor grumble was with the mystery surrounding Ellery's Aunt. There was a superb bombshell right at the end in regards to this but I would have liked to have seen more exposition of this plotline. That aside, this was a hugely enjoyable read that was absorbing, thrilling and packed full of plot twists, red herrings and suspicious characters.