Synopsis:
Alpha wolf Selenka Durev’s devotion to her pack is equaled only by her anger at anyone who would harm those under her care. That currently includes the empaths who’ve flowed into her city for a symposium that is a security nightmare, a powder keg just waiting for a match.

Ethan Night is an Arrow who isn’t an Arrow. Numb and disengaged from the world, he’s loyal only to himself. Assigned as part of the security force at a world-first symposium, he carries a dark agenda tied to the power-hungry and murderous Consortium. Then violence erupts and Ethan finds himself crashing into the heart and soul of an alpha wolf.

Mating at first sight is a myth, a fairytale. Yet Selenka’s wolf is resolute: Ethan Night, broken Arrow and a man capable of obsessive devotion, is the mate it has chosen. Even if the mating bond is full of static and not quite as it should be. Because Selenka’s new mate has a terrible secret, his mind surging with a power that is a creature of madness and death… 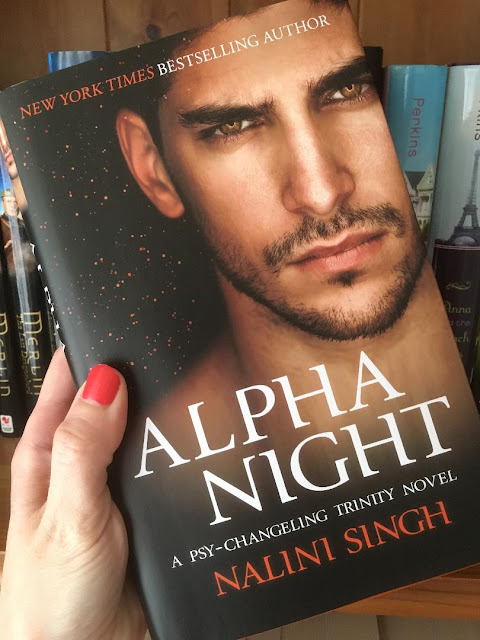 Review:
I have yet to read all of the books in the Psy-Changeling Trinity series but I loved the previous installment, 'Wolf Rain' so I had high hopes for 'Alpha Night'. I think because of the fact that I haven't read the whole series, some parts didn't make as much sense to me as they probably should and occasionally, I got a little confused about some of the different factions that feature in the book. So I would recommend that you start from the beginning as I think it would add to your overall enjoyment.

'Alpha Night' features Alpha wolf, Selenka Durev and Ethan Night, an Arrow who feels that he has been irrevocably damaged by his childhood and upbringing. They are an odd pairing but when they first meet, they discover that they have mated at first sight, even though they know next to nothing about one another. Mating at first sight is believed to be an almost impossible myth but when it happens to these two, the bond they forge is unbreakable. The problem is that the mating bond isn't quite as it should be and that Ethan's mind is shadowed by a sinister force that could prove to be deadly.

At the start, I wasn't too sure about the fact that the main characters mated at first sight. I mean this literally happens within the first couple of chapters and so there was no time to feel the slow build between the couple as they got to know each other and fell in love. It just happened completely out of the blue. I liked the fact that their devotion meant they were immediately protective of each other but I missed the romantic build-up that normally happens. As the story progressed, I loved the way that Ethan integrated with Selenka's pack and I was utterly charmed by the fact that the pups (and Selenka) loved him so much!

The character of The Architect mysteriously appears in the story again and I'm dying to know who they are. Nalini Singh is really drawing out the suspense which has me so intrigued about their real identity and the ultimate end-game.

I have to say that I didn't enjoy this one as much as 'Wolf Rain' but I'm still eagerly awaiting the next book in the series. If you love paranormal-romance then Nalini Singh is an author that needs to be on your to-read list.