Bodyguard: Hostage by Chris Bradford, published by Penguin on 2nd May 2013

Goodreads synopsis:
In a dangerous world, everyone needs protection.

No one suspects that a teenager could protect someone – but Connor Reeves is no ordinary 14 year old. He’s a professional bodyguard trained in surveillance, anti-ambush techniques, hostage survival and unarmed combat. When he’s summoned to protect the President’s daughter, his protection skills face the ultimate test.

Alicia doesn’t want to be guarded. She just wants to have fun. With no clue that Connor is her bodyguard, she tries to escape the Secret Service and lead him astray. But unknown to her and Connor, a terrorist sleeper cell has been activated.

Its mission: to take the President’s daughter HOSTAGE. 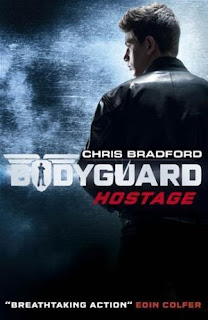 Review:
I love books about boy spies and the Alex Rider series by Anthony Horowitz is one of my favourites.  This series is in a similar vein but with a twist - instead of spies it focuses on teen bodyguards who are recruited and trained to protect people of importance.  As teenagers they are able to go places where a standard protection team are unable to go.

The author, Chris Bradford, underwent professional bodyguard training in preparation for writing 'Hostage' and his dedication shows in the authenticity of the story.  There's a lot of detail about the extent of the training that someone must undergo to become prepared to protect someone else's life and that was a really fascinating element of the book which I enjoyed reading about.

Being a bodyguard is a tough, dangerous job, not suited to everyone, but fourteen year old Connor Reeves, who is the central character in the story, seems to have a talent for it.  Recruited to join the team, he is soon sent on his first job - to protect the daughter of the President of the United States.  Connor is tough and resilient but is facing the biggest and most dangerous challenge of his life.

I loved this book and read it in one sitting.  The plot was utterly gripping and compulsive and each chapter was packed full of moments which left me on the edge of my seat.  If you're still mourning the end of Alex Rider or Young Bond and looking for something to fill the void then let me tell you, this is it!  Fast-paced with non-stop explosive action, boys and girls alike should gain a lot of enjoyment from 'Bodyguard: Hostage' which showcases action-adventure at its very best.

Chris Bradford is currently hard at work on the next exciting instalment 'Bodyguard: Ransom' which is set to be published in May 2014 and I for one can't wait.
Posted by Samantha (A Dream of Books) at 00:00