Fallen Too Far by Abbi Glines, published by Simon and Schuster on 4th July 2013

When Blaire Wynn's mother passed away, Blaire's life changed in an instant. Having cared for her sick mother for the last three years, suddenly Blaire has to leave the small farmhouse in Alabama they shared, to move in with her father and his new wife in their sprawling beach house along the Florida gulf coast. But what she isn't prepared for is the lifestyle change that comes with the move, and she knows she'll never fit into the new world of luxury and extravagance that suddenly surrounds her.

Even worse, her father has run off to Paris for the summer with his wife, leaving her stranded with Rush, her new stepbrother, who's irritating, arrogant and… seriously sexy. Rush is as spoiled as he is gorgeous; his famous father's guilt money, his mother's desperation to win his love, and his charm are the three reasons he has never been told no. Blaire knows he is anything but good for her, but somehow she can't fight the attraction she's feeling, especially when she starts to think the attraction might be mutual… Rush is jaded and has secrets Blaire knows she may never uncover but even knowing all of that Blaire just may have fallen too far. 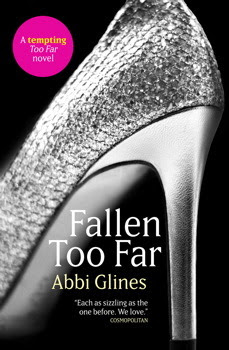 Review:
I'm always excited to read a new Abbi Glines book and I couldn't wait to start this one as soon as I got my hands on it.  I stayed up late to finish it because it was so good I couldn't possibly put it down!

Blaire's mother has died so she reluctantly goes to live on a temporary basis with her father and his new family.  Once there she meets her step-brother Rush with who she shares an instant connection.  I really liked Blaire.  She's a small town girl and has devoted her teenage years to caring for her sick mother.  She's kind and compassionate and has a big heart.  She is determined to get by on her own terms and doesn't want anyone to think she's a freeloader like her father.  She soon gets a job at the local country club and isn't afraid to work hard if it means paying her own way.  She sticks to her principles which I admired and generally tries to be positive about things even when things get rough.

It took me a lot longer to warm to Rush which I was surprised about because I normally fall head over heels for Abbi Glines male leads.  My immediate impression of him was that he was quite arrogant and unfeeling and a bit of a spoilt, rich kid.  He gradually grew on me but I still think he needs to redeem himself and luckily, as this is only the first book in the series, there's still plenty of time for him to win me over.

There are some pretty steamy scenes in the book but also some really tender moments between Rush and Blaire who seem to share the same magnetic pull to each other.  That's one of the reasons why the ending was quite a shock and completely unexpected.  I need to know what's going to happen next...immediately!

There were lots of great secondary characters in the story too.  I would love to know more about Woods and Grant and I liked Bethy who Blaire takes under her wing and tries to help get back on the right path.

I can't get enough of Abbi Glines's books.  She really can't write them fast enough for me.  They are sooo good!  The second book in the series is 'Never Too Far' and I have a feeling there will be plenty more twists and turns in the journey of Rush and Blaire before they hopefully get there happy ever after.
Posted by Samantha (A Dream of Books) at 00:00