Review: Up in Flames - Nicole Williams

Up in Flames by Nicole Williams, published by Simon and Schuster on 1st August 2013

Goodreads synopsis:
Elle Montgomery is a good girl. Born and raised in a small town in Washington State, she's always done exactly what she's supposed to and what everyone expects of her. She helps out at the cafe her family owns, and has been dating the pastor's son, Logan, since she was allowed to go on her first date at sixteen. Cole Carson's life couldn't be more different. An adrenaline junkie, he has worked as a smokejumper for the past three summers, roaming from town to town following the fires. Cole lives his life day to day and dreads the thought of putting down roots or being tied to one person.

Following an awkward, embarrassing first meeting, Elle knows she should keep away from Cole and the feelings he ignites in her. And Cole just can't help but pursue Elle, the girl who seems immune to his charms. But as summer heats up, their attraction grows, and as tensions between them run high, Elle and Cole realise that one way or another, they're going up in flames... 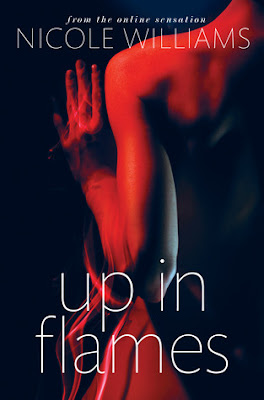 Review:
This is my first Nicole Williams book but it definitely won't be my last because I loved it.  This was a five out of five star read featuring hot new couple Elle and Cole.  Although I thought it was fantastic I was also pleased to discover that it was a stand-alone novel because I'm getting a little bit tired now of every new book being part of a trilogy.

Main character Elle has her whole life mapped out for her by her father and longstanding boyfriend Logan.  According to them she'll stay in the small town where she has grown up.  She'll take over the family diner and she and Logan will get married and settle down together.  Then she meets Cole and he turns her whole life upside down.  Suddenly she has to start making some decisions of her own, even if they hurt some of the people she loves the most.

I found it difficult at times to reconcile the character of Elle with the picture she paints of herself prior to meeting Cole.  Then again he is the catalyst for her finally opening her eyes and embracing the person she really is and wants to be in the future.  She has let others control her actions and decisions and has put aside her own hopes and dreams to make them happy but in the process she has become someone she's not.  It was great to see her finally opening up and standing on her own two feet for once.

There are some hot, hot, hot scenes between Elle and the gorgeous Cole who share an instant chemistry which you can almost feel crackling off the page.  She can breathe and be herself with Cole without any pretence.  Every time they are together, it's like two magnets being drawn to each other and although Elle tries to resist at first, you feel it's almost inevitable that they will succumb.

If you're a fan of bad boys who also happen to be sexy as hell and have hearts of gold then you need to meet Cole Carson who has shot into my list of favourite boys in books.  He not only got Elle's pulse racing but mine as well!

'Up in Flames' was an addictive read which I could not put down.  I now can't wait to read more by the tremendous Nicole Williams.
Posted by Samantha (A Dream of Books) at 00:00