Goodreads synopsis:
Emma's not sure that LA's for her, but when she accompanies her sister Jane to an audition, a chance meeting with a teen TV star starts to change her new sunshine lifestyle for the better... But what about Oscar, so far her only friend in LA, who's turning out NOT to be the idiot she thought he was?

Soon Emma begins to find herself torn between two boys and reconsidering her entire future.

Maybe LA's not that bad after all. 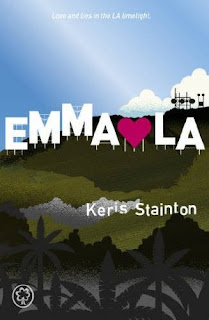 Review:
Leaving behind the bright lights and buzz of New York City, Keris Stainton's latest offering is set in the sunnier climes of Los Angeles, home of the stars.  When Emma's mother gets a fabulous job offer, Emma and her younger sister Bex move with her to start a new life in LA.  Once there, she reconnects with her childhood friend Oscar who has undergone quite a lot of growing up since she saw him last.  However, with handsome movie stars around every corner, Emma has to make a big decision about who and what she wants.

While I was reading this book I couldn't help but feel envious of Emma getting the opportunity to start fresh with a completely new beginning.  Although she's more dubious about moving to the other side of the world than Bex, who throws herself wholeheartedly into a new lifestyle, she gradually finds herself embracing the new and learns to open herself up to exciting, new experiences.

I loved the idea of being able to reach for your dreams, however impossible they may seem and having the courage to follow your heart.  Yes, you may fail at times but until you try you'll never know.  One of my own dreams is to one day visit New York but after finishing this book I'm adding Los Angeles to the list too!

I thought that Keris Stainton perfectly captured everything about Emma's new home, from the awesome food to the sights and sounds of the city, such as Grauman's Theatre and the Hollywood Walk of Fame.  There were so many amazing places and they were all so wonderfully described that I really felt I was living vicariously through Emma.

As well as Emma, there are lots of other fab characters in the story, including the adorable Oscar, who is the perfect mix of cute and nerdy (the latter in a good way!) and Emma's sister Bex who she has a very close relationship with.

'Emma Hearts LA' is an amazing book and the perfect light, summery, fun read.  It's a book with a heart of gold and a wonderful read.
Posted by Samantha (A Dream of Books) at 00:00