Dreamless by Josephine Angelini, published by Macmillan on 5th July 2012

As the only Scion who can descend into the Underworld, Helen Hamilton has been given a nearly impossible task. By night she wanders through Hades, trying to stop the endless cycle of revenge that has cursed her family. By day she struggles to overcome the fatigue that is rapidly eroding her sanity. Without Lucas by her side, Helen is not sure she has the strength to go on.

Just as Helen is pushed to her breaking point, a mysterious new Scion comes to her rescue. Funny and brave, Orion shields her from the dangers of the Underworld. But time is running out—a ruthless foe plots against them, and the Furies’ cry for blood is growing louder.

As the ancient Greek world collides with the mortal one, Helen’s sheltered life on Nantucket descends into chaos. But the hardest task of all will be forgetting Lucas Delos. 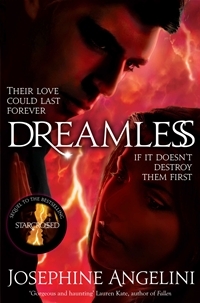 Review:
*There may be spoilers from the previous book in the series.
‘Starcrossed’ by Josephine Angelini was one of my favourite books of last year so understandably I’ve been unbelievably excited about the sequel ‘Dreamless’. Ever since reading the final page of the first book in the trilogy I’ve been looking forward to returning to the series and catching up with all the characters. This is a book that really will leave you “dreamless” because you’ll be up all night reading it and like me, probably won’t get any sleep at all!

The storyline focuses mainly on Helen’s nightly descent to the Underworld and her quest to defeat the Furies. Determined to end the blood debt once and for all, she endures extreme torture and pain during her nightly ritual, and even with her health failing, she won’t stop. In the Underworld, Helen meets Orion, who has been sent to protect her. Through their ordeal, the two share a powerful bond and knowing that she can never be with Lucas, Helen finds herself drawn towards him.

The Underworld setting was quite literally hell for Helen. I thought the descriptions of it were absolutely perfect and it gave me a chill every time Helen had to go there. She comes across some really scary things and has to endure unimaginable horrors.

Orion is one of my favourite new characters in the series. He’s had a really tough life but he’s still a very positive and upbeat person and becomes Helen’s saviour in the Underworld. The two are linked together from the start and whereas I don’t normally like the guy that becomes the third person in a love triangle, for Orion I’ll make an exception! He’s kind and understanding and pretty irresistible, but of course, Helen is still fighting her feelings for Lucas. I did love all the phone texts which went back and forth between Helen and Orion and the way that even when they weren’t together, thinking about Orion always made Helen feel better.

There definitely isn’t as much Lucas in ‘Dreamless’ which is a shame as I missed his presence in the story. It’s heartbreaking to see him struggle to stay away from Helen when he’s quite obviously head over heels in love with her.

I also enjoyed getting to see the developing relationships between Helen’s friends and the other Scions. I’m a big fan of Claire and Jason and I liked the way he was so protective of her because he was worried that as a ‘human’, she would get hurt.

The plot is fast paced and complex and plunges the reader straight back into the action from the get-go. If I’d had time I would have liked to have re-read ‘Starcrossed’ first to remind myself of everything that had happened previously but saying that, it didn’t take me long to pick up the threads of the story again.

There is a massive cliffhanger at the end which means that I now have another long and impatient wait until the third book is published.
Posted by Samantha (A Dream of Books) at 00:00