Goodreads synopsis:
Fred and Jodie are now an item. Disaster! But Jess soon has other things to worry about when she invites a few friends over for a quiet night in and word accidentally gets out that she's having a huge party. More and more people arrive, many of whom Jess doesn't even know! The evening spins out of control, Jess's house is devastated and her mum's beloved daffodils are trampled. Double disaster! Jess is seriously going to need her friends' help to get out of this dilemma ... 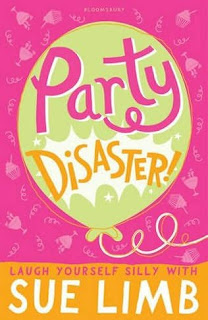 Review:
Having not read the previous books in Sue Limb's Jess Jordan series, I wasn't sure if I was going to be able to pick up the thread of the story and know who all the characters were.  It turned out to be no problem at all though as Jess was such an engaging figure that she won me over almost immediately.  The plot was also easy to follow and centred around Jess's fixation on her ex-boyfriend Fred who she wants to win back, except he's now dating one of her other friends Jodie.

Light hearted and entertaining, this was a fun book with laugh out loud humour which was the perfect pick me up!  I giggled at some of the predicaments that Jess finds herself in, such as when she decides to have a few friends over and it turns into a party disaster.  Her efforts to clear up before her Mum discovers the mess are truly funny, as are her attempts to work out whether or not Fred still has feelings for her.

The story is about friendship, love and family and Jess is a character with a heart of gold.  She may not always do the right thing but she always has the best of intentions.

Because of the ages of the characters, I think 'Party Disaster!' is more suited to a slightly younger teen audience.  Fans of Cathy Cassidy are also sure to enjoy this one.  I read it in one evening and will probably go back and read the other books in the series now too to see how it all began.
Posted by Samantha (A Dream of Books) at 00:00