One of the books which I've been eagerly anticipating this year is 'The Forsaken' by Lisa M. Stasse which is published in the UK by Orchard Books on 2nd August 2012.  Not only do I want to read it because I love dystopian fiction but when I saw the publisher describing it as 'Lost meets The Hunger Games' I was even more excited!! 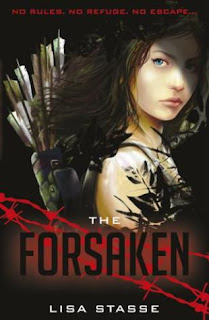 Alenna Shawcross is a sixteen-year-old orphan growing up in a police state formed from the ashes of Canada, the US and Mexico after a global economic meltdown.

But when she unexpectedly fails ‘the test’ - a government initiative which supposedly identifies teens destined to be criminals - she wakes up alone on a remote island reserved for the criminally insane.

Terrified and confused, she soon encounters a group of other teen survivors battling to stay alive, including Liam, a boy who will become her love... and her lifeline.

Soon Alenna makes the terrifying discovery that there’s more to the island (and her past) than she could ever have guessed... But who can she trust? And can she ever escape?

Here's a look at the official trailer for 'The Forsaken' which is absolutely epic!