Goodreads synopsis:
When the vampire tribes convene for the rare Blood Moon ceremonies, Solange Drake is plunged into a battle with her feral nature. The Drake brothers have been raised knowing they had to protect their younger sister at all cost. But forbidden magic and a mysterious stranger have put all of them in terrible danger.

Nicholas is going to have to make a difficult choice: between his girlfriend, Lucy, and his little sister, Solange - blood or love. 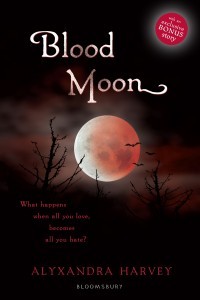 Review:
This is the fifth book in the extremely popular Drake Chronicles series by Alyxandra Harvey.  The story picks up after the events of 'Bleeding Hearts' with Solange struggling to battle her own vampire nature.  At the same time, the Blood Moon ceremonies are taking place and vampire tribes have convened from all over the world to take part which means several new faces.

The focus of the story shifts between Solange, Nicholas and Lucy.  Solange has never been one of my favourite characters but she undergoes quite a change in this book.  There are reasons for her strange and unpredictable behaviour and they are pretty shocking!  It will be interesting to see these explored further in the next book.

I loved the fact that much of the plot resolves around Lucy and Nicholas who are adorable together.  They featured prominently in the first book of the series so it was nice to hear from them again and see events unfolding from their perspective.  Lucy is trying to fit in as a new student at the Helios-Ra school and is also coping with her best friend not speaking to her.  Although Solange has treated her quite badly, Lucy still wants to try and put things right and isn't willing to give up on her.  Nicholas has his own problems too and faces a choice between his girlfriend and his sister.  However, when they are with each other all these things seem to just fade into the background.  There's one particularly romantic scene between them which left me feeling all warm and fuzzy inside!

The rest of the Drake family also feature too, as well as Hunter and Isabeau who it was good to see again along with their respective other halves.

The ending of 'Blood Moon' nearly killed me because it leaves you on such a big cliffhanger.  Please tell me that I don't have too long to wait until the next book in the series because I don't think I'd be able to stand it otherwise.  I love the way that Alyxandra Harvey always throws something new and unexpected into the plot and continually surprises me with the directions that some of the characters take.

This edition also features an exclusive bonus story about Liam and Helena Drake which was a nice added extra.
Posted by Samantha (A Dream of Books) at 00:00