Wereworld: Nest of Serpents by Curtis Jobling, published by Puffin on 7th June 2012

Goodreads synopsis:
Young Werewolf Drew Ferran, rightful king of Westland, has rushed to the aid of the besieged Staglords, whose mountain stronghold is surrounded by the forces of the Werelion Prince Lucas.

And deep in the haunted Dyrewood forest, the Wereladies Gretchen and Whitley seek sanctuary within the city of Brackenholme. No opposing force has ever breached the palisade walls, but danger could be closer than they think... As Lyssia's greatest war rumbles towards a thunderous climax, the lines between friend and foe are blurred. What if the enemy is one of their own? 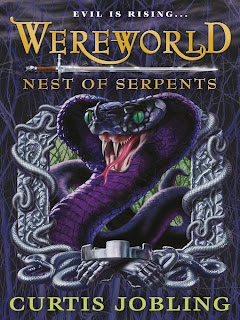 Review:
I was super excited when I realised that there was a new book in the Wereworld series out.  After having been left on a cliffhanger at the end of the fourth book, I was eager to pick this one up and start it straight away.

The first part re-introduces the reader to all the characters and picks up the thread of their stories.  Hector, Drew, Whitley and Gretchen, alolng with Drew's brother Trent are scattered throughout Lyssia.  Drew is helping the Staglords defend themselves against the Werelion Prince Lucas, whilst Gretchen and Whitley are headed for Brackenholme and safety.  As the story progresses, an old foe returns to put everyone's lives in danger.

As I've read each book in this series, I've been continually impressed and amazed at the sheer scale and scope of the story and the Wereworld universe.  There's now a huge cast of interesting characters with new faces appearing all the time.  The only problem is keeping track of all of their names! Sometimes I have to check back to make sure I remember who someone is correctly.

I've always made no secret of my love of Hector, the Boarlord.  He's made quite a transformation from the beginning of the series and at times he seems quite unrecognisable from the person that Drew first met.  Without giving anything away, because my lips are firmly sealed, I'm starting to worry that he may finally be beyond redemption.  I'm not sure if there is any way back for him now.  However, there's always hope and I truly believe that although he's done some terrible things, beneath it all is still a heart of gold.

I also enjoyed getting to see more of Drew's brother Trent who is now repentant about his actions towards his brother and wishes to put things right.  I think there may be a possible romance on the cards between him and another character but I'll have to wait and see.  Gradually all the characters are being drawn back together and I'm looking forward to finally seeing them all reunited.

Even though Jobling is now on book five, the writing remains wonderfully vivid and the story gets even more engaging with each new instalment.  There are some amazing battle scenes which are brutal, bloody and no holds barred and there's plenty of action and adventure to satisfy readers.  There's a fast and furious pace to the story and I didn't want to put the book down for a single second.

There's an epic quality about this series which I love and I can only hope that Jobling writes fast because I want more now!

Just a quick note about the cover of the book.  The cover art for the series has been redesigned and published with a whole new look.  I have to say that I preferred the old one and not only because I like all my books in a set to match.
Posted by Samantha (A Dream of Books) at 00:00