Review: Metawars: The Fight for the Future - Jeff Norton

Metawars: The Fight for the Future by Jeff Norton, published by Orchard Books on 2nd August 2012

Goodreads synopsis:
In an unforgiving future, two warring factions - the MILLENIALS and the GUARDIANS - are locked in a brutal battle over control of an online virtual world called the Metasphere. Jonah Delacroix has always known which side he's on - the same side as his dead father. But when he assumed his father's avatar, he learns that things aren't as black and white as he once believed. He's catapulted into a full-throttle race through both worlds - but can he find the truth? 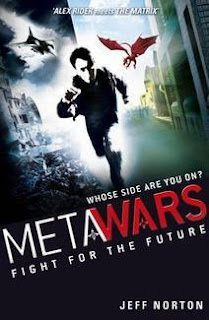 Review:
Jeff Norton is a writer-director turned author who aimed to write a book for the current generation of teenagers obsessed with video games and living in a technology fuelled society.  'Metawars' is Norton's debut YA novel and is a roller coaster ride through a virtual world where people go to escape the humdrum existence of their real lives.

Elements of the story reminded me of the film The Matrix, with people plugging themselves into a virtual reality which is more real to them that their own day to day existence.  I could feel the sense of escapism that they experienced and the freedom they had to experience things which they wouldn't normally be able to do.  The main character Jonah for example, delights in the sensation of flying which is mentioned several times throughout the book.  I mean who wouldn't want to be able to do that whenever they wanted to.

Those visiting the virtual world are represented by avatars.  These are created by the person's subconscious and can be pretty much anything and everything.  It was slightly strange at first to see a dragon, unicorn and elephant conversing with each other, but after a while I didn't think much about it at all.  It just seemed to be normal!

One of the most interesting ideas in 'Metawars' is that you can upload your virtual self and all your memories.  This means that even if you die in the real world, you can in effect live forever in a virtual state.  I thought this was a fascinating idea and one which is explored through Jonah's grandmother who he visits even after her death.

There is an exciting climax to the story with plenty of questions left unanswered.  I'm sure there is a planned sequel to the book which hopefully will deal with many of these things.

This book will appeal hugely to male readers but there's lots to catch the eye of a female audience too.  There is pretty much non-stop action from the word go and the drama never lets up.  I found the plot a little bit complicated in places but on the whole Norton has come up with a terrific storyline which screams excitement and adventure.
Posted by Samantha (A Dream of Books) at 00:00