Riven by Sarah Bryant, published by Snowbooks on 1st May 2012

Goodreads synopsis:
Devastated by the death of her boyfriend, Lucas, Sophie moves in with her mother in Edinburgh, hoping to grieve quietly. But since meeting Lucas, nothing about Sophie's life has been quiet, and his death doesn't change this. If anything, life has become more complicated and confusing than ever. Her mother is determined that she get over him. A strange, compelling man seems to be stalking her. And she's begun to have visions she doesn't dare believe. Because, if she does, it means that Lucas isn't dead at all. Instead, he's entangled in a fate worse than death. And only she can save him. 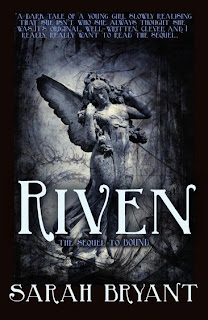 Review:
Please be aware that there may be spoilers from the previous book in the series.

I fell in love with 'Bound' by Sarah Bryant when I read it earlier this year and couldn't wait to get my hands on the sequel.  'Riven' exceeded all my expectations and had me gripped and immersed in the story from the very first page.  Brilliantly written and with an intricate and astounding plot which was both imaginative and magical, Bryant has done it again with this fabulous novel.

The story picks up where 'Bound' left off.  Sophie is devastated after the death of Lucas and tries to rebuild her life with her mother in Edinburgh.  In the Scottish city she meets several new faces, including the mysterious Rive and kind hearted Angus but is still haunted by dreams of her lost love.

I can't mention too much about the plot because I don't want to give anything away but suffice to say that there are lots of unexpected twists throughout.  You never know what is going to happen which is part of what makes it so enjoyable.  At the centre of the plot lies Sophie's struggle to survive without Lucas and to cope with losing the love of her life.  With this in mind, it was interesting to see the interaction between Sophie and her mother, the latter not understanding how deep the bond between her daughter and Lucas had been.

I enjoyed learning more about Sophie and Lucas's history which was fascinating, including how they first met each other and how their love developed.  They are a perfect couple in so many ways and it's easy to understand the attraction which lies between them.  I also loved Sarah Bryant's interpretation of the beginning of creation and the detailed descriptions provided of the hierarchy of angels, aeons, daevas and humans.

'Riven' took my breath away!  Powerful storytelling with an unbreakable love at it's heart makes this a book to be savoured and read again and again.  I can't recommend it highly enough.  There was a tantalising peek at the end, of the last book in the trilogy, which is called 'Morningstar' and due to be published in 2013.  I'm dying to read it!
Posted by Samantha (A Dream of Books) at 00:00