Goodreads synopsis:
Behind the ivy-clad walls of an exclusive boarding school, lurks a sinister web of corruption, scandal, and conspiracy. American student Raven Stone has noticed something is horribly wrong. First there were the unexplained disappearances. Then there were the teachers' lies. And now the death threats ...Also entangled in the disturbing turn of events is the enigmatic Kieran Storm - a fellow student with a killer intellect and a body to die for. He's heading for trouble and taking her with him. Raven can feel herself falling in love, but can she trust a boy she knows almost nothing about? 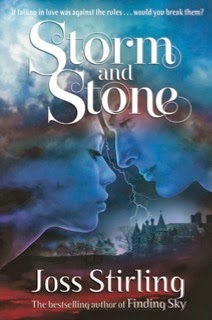 Review:
I adore Joss Stirling's books and I was extremely excited about reading 'Storm and Stone' which is her new standalone novel.  I wasn't disappointed because it was a thrilling read which had me hooked from the start.

The story is set in an English boarding school called Westron.  Raven is an American scholarship student at the school.  She's ostracised and picked on by everyone until she meets new students Kieran and Joe, who discover that there is something strange going on at the school.  After reading the blurb I thought it was going to be a fairly typical high school romance story but I was wrong when part way through it turned into something much more gripping and mysterious.

I loved the relationship between Raven and Kieran.  He is clever and incredibly intelligent but Raven definitely makes him lose his head.  They fit together so well and function perfectly as a team.  The romance in the book is realistic and brilliantly written.  A trait of all Joss Stirling books.  There's no case of instant love but instead an attraction which simmers away between Raven and Kieran and eventually turns into something more.  He feels protective about her and often tries to steer her away from danger, but she is more than capable of looking after herself which she definitely proves at the end of the book.

Joss Stirling is one of my favourite British authors and if you're a fan of her Soulfinders series then you will love this new offering.  As I was reading, I could even picture it as a TV series because I think the concept is perfect for the small screen.

Although this was originally billed as a standalone, I've since heard that it could actually be the first in a series about the characters which is excellent news!