Dead Silent by Sharon Jones, published by Orchard Books on 6th February 2014
Goodreads synopsis:
When Poppy Sinclair and her boyfriend visit snowy Cambridge, she doesn't expect to discover the body of a student - arms outstretched in the act of smearing bloody angel wings on the chapel's floor.

Suddenly, Poppy is faced with the possibility that the one closest to her heart might be the one committing the most malicious of crimes.

Dodging porters and police, dreading what she might find, Poppy follows the clues left by a murderer bent on revenge... 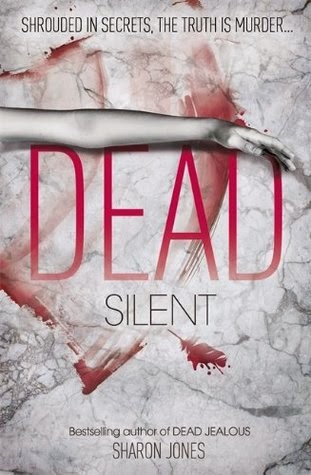 Review:
‘Dead Silent’ by Sharon Jones was an exciting and fast-paced read in my new favourite YA genre, crime thriller. Poppy is back and embroiled in another mystery when she goes to visit Cambridge with her now boyfriend Michael. What starts out as a perfectly normal trip for a university interview, turns out to be far more dangerous than anticipated when bodies start turning up dead. With someone very close to Poppy looking suspiciously guilty, she sets out to prove their innocence and solve the string of murders.

I loved the setting of this book.  Cambridge is steeped in history and this made it a brilliant place to unravel a crime, drawing on some of it's secret traditions. The campus itself also felt like its own small community, which lent an air of claustrophobia and suspicion to proceedings. It was hard to know who could be trusted among the Oxford elite.

I really like the way that although the crime itself embroils Poppy deeply, we still get to see her dealing with day-to-day problems, such as whether or not to take the next step with Michael and repairing the fractured relationship between her and her father. She’s a very interesting character and in ‘Dead Silence’ it was intriguing to see some different aspects of her personality and beliefs being explored in more depth. I’m curious to see how this will be developed in further books in the series. I love the transition of Poppy and Michael’s friendship into romance as I was dying for them to get together in the previous book. I only wonder how they’ll cope in the future being at different universities.

The story was gripping from start to finish and extremely unpredictable. I had no idea who the guilty party was which meant that the unveiling of the truth was incredibly exciting. If you love crime novels, or even if you don’t, you definitely need to read ‘Dead Silent’ which is perfect for fans of contemporary YA who also love a good mystery, a dash of romance and a strong, entertaining and intelligent female heroine.

I hope that there are lots more Poppy Sinclair mysteries on the cards from Sharon Jones in the future.
Posted by Samantha (A Dream of Books) at 00:00