The Academy: Love Match by Monica Seles, published by Bloomsbury on 13th February 2014

Goodreads synopsis:
After a star performance in the semi-finals at a tennis competition, Maya is labelled The Next Big Thing and books a high-profile modelling job. The only problem is her co-star in the campaign is her super-hot ex-boyfriend, Jake Reed – and this is a job that her rival, Nicole, wants! Maya’s only just put the betrayal by Jake and Nicole behind her and now Maya is being drawn back into a circle of jealousy and desire. Luckily, she knows Nicole’s latest secret and gossip is a powerful weapon at The Academy! 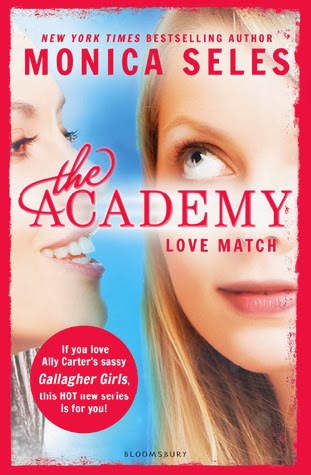 Review:
'The Academy: Love Match' is the second book in Monica Seles's series about promising tennis player Maya, who finally seems to be getting her fair share of the limelight.  I enjoyed the first book last year and although I liked the fact that it combined sport with lashings of drama and gossip, I did wish that the tennis angle had been played up a bit more.  I wanted to be given more details and insights into what it meant to be a full-time player trying to make it on the big on the professional circuit and the sacrifices that this entailed.  Sadly, this wasn't remedied in 'Love Match' as I felt like I never really saw the blood, sweat and tears that Maya should have been putting in to achieve success.  That aside, I still enjoyed the story and I found it a light, entertaining read which I finished in one evening.

At the end of the previous book, things were left in a bit of a mess between Maya and her boyfriend Jake and I was looking forward to seeing how this was going to be resolved.  Their romance was however put on the back burner for most of the story and it wasn't until the very end that this thread seemed to be picked up again.  There was a lot more Travis than Jake throughout which was a shame because I think Travis is definitely the more one-dimensional of the two brothers.

I love the friendship between Maya and her friends Cleo and Renee.  They've really formed a strong bond and it was nice to see them helping each other out and supporting Cleo through a difficult situation.  I imagine that the environment they're living in fosters intense competition between athletes but also provides them with a built-in support system because everyone understands what they are each going through.

Although a little light-weight on plot, I'm sure sports fans will lap this up.  I still feel invested in Maya's story but I do hope that the next in the series will remedy some of the issues I had with 'Love Match'.  I'd love to see Maya finally put some of the petty dramas behind her and really step up to the plate.  I know she has it in her to do so.