Bet Your Life by Jane Casey, published by Corgi on 13th February 2014

Goodreads synopsis:
Jess Tennant has now been living in Port Sentinel for three months, and is just beginning to relax and think of it as home after the murderous events of the summer. But in the small hours of a dark night, a teenage boy is left for dead by the side of the road. Seb Dawson has a serious head injury and may not survive - and Jess decides to find out who beat him up, and why?

As she investigates, Jess discovers that Seb was involved in some very dangerous games. A secret predator around girls, he would do whatever it took to abuse them, from lying and blackmail to spiking drinks. Could a group of vengeful victims be behind his attack? Or is there someone else with a grudge against Seb and who will stop at nothing to silence him? 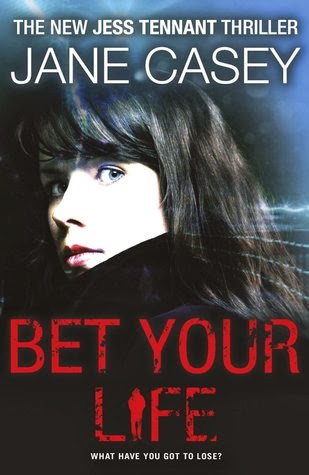 Review:
'Bet Your Life' is the second book about teenage detective Jess Tennant.  Although she claims in the book that she's not interested in becoming Port Sentinel's answer to Nancy Drew, she has the same quick wit and ingenuity and the same uncanny knack of seeing things that other people don't.  It's this skill which gives her the ability to connect all the dots and uncover the truth, even when others may want to keep it hidden.  Of course, this also means that she often risks her own life in her single-minded pursuit of the truth but that only makes me admire her even more.

Jess is asked to investigate the case of local boy Seb Dawson, who has been left for dead by a supposed hit and run.  His little sister suspects that there's a lot more to the 'accident' and wants Jess to find out the truth.  As she begins to dig into the incident, she discovers some startling secrets about him, as well as a hidden conspiracy more shocking than she could ever have imagined.

The opening chapter of 'Bet Your Life' was so creepy.  You know that something terrible is going on but you have no idea exactly what yet and who is involved.  It was a fantastic start to the book and really sent shivers down my spine as I read it.

As well as some intriguing and unexpected plot twists concerning Seb's case, I also like the fact that Jane Casey interweaves Jess's day to day life into the story too.  She's dealing with problems with her family, as well as romantic troubles and this helps to ground the story and make it more realistic.  After the events of the first book in the series, things are not great between her and Will but she also has another boy, Ryan, chasing after her too.

Tense, twisty and with an ingenious mystery, I completely loved every second of this book.  I sincerely hope there are many more Jess Tennant thrillers to come as she's Nancy Drew for a whole new generation of readers!
Posted by Samantha (A Dream of Books) at 00:00