Earthfall by Mark Walden, published by Bloomsbury on 6th February 2014

Goodreads synopsis:
Sam awakens to see strange vessels gathered in the skies around London. As he stares up, people stream past, walking silently toward the enormous ships, which emit a persistent noise. Only Sam seems immune to the signal. Six months later, he is absolutely alone.

Or so he thinks. Because after he emerges from his underground bunker and is wounded by a flying drone, a hail of machine-gun fire ultimately reveals two very important truths: One, Sam is not, in fact, alone. And two, the drone injury should have killed him—but it didn’t.

With his home planet feeling alien and the future unstable and unclear, Sam must navigate a new world. 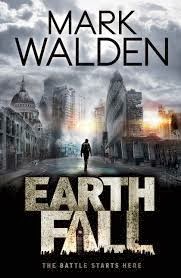 Review:
The author of the H.I.V.E series, Mark Walden, has turned his imagination to envisioning the coming of aliens to earth.  'Earthfall' is the first chapter about school boy Sam and his fellow survivors, who band together to create a renegade group, intent on thwarting the unwanted intruders to their planet.

From the opening chapter, the reader is thrust straight into the fight as our as yet unnamed hero battles against a drone-like creature - an octopus type object with deadly tendrils.  This left me in no doubt that the rest of the book was going to be a rollercoaster ride for survival.

I thought Mark Walden did a really good job of depicting the world as its now become.  The majority of humans have become Walkers, as Sam calls them and among them are his mother and older sister.  There's quite a detailed and slightly complex explanation of events near the end of the book which provides a fresh perspective on things which have happened.  This was a bit hard to follow at first but I gradually began to make sense of it all and found it fascinating.

I would have liked to have seen more of Sam's progression in the book, as his training was skipped over quite quickly.  Although he's wily and tough from the beginning, I think after having been on his own for such a long time, that it would have taken him longer to adjust to being part of a group.  It would also have been interesting to have found out more background to some of the other people that he joins up with.

'Earthfall' was a promising start to the series which will appeal to slightly younger readers, boys in particular. There's lots of action and excitement which will have them totally hooked!
Posted by Samantha (A Dream of Books) at 00:00